Security is the headquarters of Cogmap2's security force, located on the east end of the station, right across from the bridge. Not only does it have a brig, armory, interrogation and a house for Beepsky, but also a number of smaller but nonetheless useful rooms:

Its air-vents can be supplied from dedicated tanks in the maintenance corridor behind the Security section. There is also a stationary gas tank with NO2 in the armory linked to these vents to knock out rioters.

The APC for this room is located in the maintenance corridor behind the Security section. Let's hope nobody in the Conveyor Belt Routing Depot figures this out...

The power is supplied via 2 cables coming from the engineering sector, running underneath the Gas Storage and the Engineering Belt Router respectively.

The Security Wing is located in the northwestern part of the station and features several facilities essential to policing the station, such as a brig, an armory, a secure hangar, a designated interrogation room, and various other smaller rooms, detailed below.

This is where most officers begin their shift. It features some essential computers, rechargers for weapons, chairs for prisoners, lockers containing security's gear, and most vital of all, the team's supply of donuts.

A buffer zone of sorts between the station and the rest of Security. It's basically a mini-Security Office, with some of the same machines and amenities. Because it's relatively narrow, it's a good place to put one of the portable flashers, so that any unruly criminal scum being brought manually into the brig will get blinded by the light.

Accessible from the security office. Theoretically where the defendant would sit during a trial, but is more often used for public executions.

Sandwiched between security proper and the bridge. Only accessible by the Head of Security. Contains his locker, a security camera viewer, a security records computer, and spicy pasta. 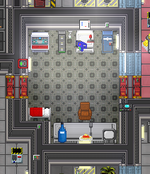 Of all these rooms, only the Brig is the one with a vent, which connects to the Aft Solars Air Hookup

The APC for the Dispatch room is on its northern wall, behind the disposal chute. The APC for the HoS Office is also on its northern wall, behind the table. The Security Office, Interrogation Room, and Defendant Chair all share an APC, which is located left of the Interrogation Room, in the same room as the Aft Solars Air Hookup.

The security wing is located on the port side of the ship, right below medbay. It contains a number of different rooms for Security Officer and other guardians of Space Law.

The security wing is located in the middle part of the ship, adjacent to the bridge. You can think of it as Space Police Station, with several rooms for the benefit of Space Police Officers:

The security wing is the headquarters of the station's local police force, the Security Officers and their chief, the Head of Security. It is located roughly smack-dab in the middle of the station, near the Owlery, and consists of a number of subrooms:

Mushroom Station's security wing is located towards the southern end of the station, across the hall from Tool Storage. You can think of it as a Space Police HQ, with several rooms for the benefit of Space Police Officers:

When you have a station shaped like a doughnut, it's almost given that it has a whole section dedicated to the biggest doughnut munchers of them all: the Security Officers and their chief, the Head of Security. The whole circle layout thing drives everyone else crazy though, so they have the rather unfortunate burden of protecting all the people who go mad from wandering the halls for so long, which tends to compound the fact that most of the crew members are already pretty insane. It features a number of subsections dedicated to the various duties involved in protecting the station and its crew.

It's lawless out in the final frontier that is space. Murder and wanton destruction strike every minute of every hour, and stations are painted not in shining royal blue or flawless grey of NanoTrasen, but in the sinister crimson of blood. In parts like these, the first and often only bulwark of the people is the criminally overworked Head of Security and their posse of Security Officers. This is their fortress, strategically located in the southwest of the outpost, close to the place and people who most need protecting. This is what's in it:

Space criminals strike everywhere. In the air, on the ground, in outer space, and, most certainly, under the sea, in the light of day, under the gloom of night--space crime truly never sleeps. But wherever space criminals tread, space Security Officers are hot on their trail. These brave space men and space women are the station's best defense against the dastardly deeds of these space crimers, risking their lives in the name of order and justice for all.

Oshan's brave team of Security Officers headquarter in the Security sector on the south end of the station, with the main entrance just below the Bridge. The entire department is split down the middle into two wings by the Security Foyer, which contains special chutes to the General Population and Interrogation Room facilities.

The west wing is primarily for detaining criminals and is occupied by the Brig and Beepsky's House. Meanwhile, the eastern wing houses most, if not all, of the station's Security equipment. There's an Equipment Room with tasers and stun batons, an office for the Head of Security, its attached Armory, and an interrogation room, all linked by two office rooms with miscellaneous doodads like segways and Security Comptuers. To south of all this, standing sad and alone, is the Secure Hangar, a garage of sorts for Security's fleet of patrol minisubs.

Most of the rooms have their own APCs, most of which are listed on their own pages. However, the equipment room and two offices all share one APC, located above a set of segways a little bit west of the Interrogation Room.

Secstotzka, sometimes called the Security Wing, Security, or just Sec, is fairly large dictatorship in the "northwestern" parts of Atlas, located above Medistan and left of Civilechia. It is most famous for its dedicated team of Security Officers and Detectives, who are led by the Head of Security and play a major role in enforcing regional laws across the entirety of Atlas. It is divided into five provinces, rather austerely named based on their functions:

There is no vent. As with criminals, clowns, and Civilechians, air is viewed with suspicion and kept as far away from Sectotzka as possible.

The Security wing is located in the upper middle of the ship, above the Bar. Hopefully, dedicated, competent and sane Security Officers and the Head of Security call this home.