Security Checkpoints are small guardposts that with various amenities important to the boys in red. Each checkpoint has a desk with a chair to to help you converse with the public in relative safety, a printer, an intercom panel tuned to the security channel, and a recharger.

There are checkpoints located at the following locations:

Security Checkpoints are small guard outposts in the station, each stocked with a security weapons vendor, a Security equipment locker of with mostly Sec armor, a wall-mounted recharger, and a Security records computer. There are two, one near Cargo, and the other in Arrivals. Customs is technically a third one, but there really isn't anything for Security there.

Arrivals's also checkpoint has an ID Computer. Security Officers won't get much mileage out of it besides the manifest printout (which they already have as a PDA app), but the Head of Security can use to upgrade their and anyone else's ID access. Also, a very big space bee sometimes works here, which means it's instantly better than anything else on the station.

Meanwhile, the one in Cargo has a Mini-Brig. Not as cool as an big bee, but it can be useful, and it's much more secure than the main one.

Neither of these checkpoints have vents.

The APCs for both of these checkpoints are on the eastern wall.

This Security Checkpoint is a small guard outpost in the far northern parts of the ship, above Escape and many crew quarters rooms. It is stocked with various amenities important to the boys and girls in red. It features:

The APC for this room is in the maintenance room above it.

The wire for said APC is in the same maintenance room.

This Security Checkpoint is a small guard outpost where the Space Mall Cops can play Space TSA and do some last minute customs duty before the shuttle arrives. It features:

This room has no vent.

This room shares an APC with the Escape Shuttle Hallway.

Security Checkpoints are small guard outposts in the station, supposedly for Security Officers to man. Each stocked with a locker of Sec gear, a recharger, and a Security records computer. There are two, one near Engineering, and one in Arrivals.

This Arrivals Security Checkpoint is a small guard outpost in the Shuttle Bay where Security Officers go to keep watch on whoever's coming in and out of the station hangar. Or spy on the rest of the station via the cameras. Because of the ID Computer here, HoPs sometimes use this as their Customs station.

On weekdays, on certain times of the day, there may be an space bee of unusual sassyness and grumpiness manning this outpost. Do not be afraid. Despite its unwelcoming countenance, it loves hugs and bee treats as much as any other greater domestic space bee, especially certain fine delicacies.

The Arrivals Security Checkpoint is a small guard outpost in the Shuttle Bay where Security Officers and the like are apparently supposed to keep an eye on who's going to, from, through, and near the general Shuttle Bay area. It is absolutely never actually used for that purpose, but officers like it anyways because they can recharge their without having to walk all the way back to Security.

Because of the ID Computer here, HoPs sometimes sets up shop here as well. In addition, on certain times on certain days of the week, you may find an space bee of unusual size sleeping here. Do not be alarmed; it's just doing its job and is supposed to be here. Behind its grumpy countenance is a benevolent soul, with a hearty love of hugs, food, bubble baths, and fine electronics.

Supply Depot Checkpoint is a little place in, obviously, the Supply Depot that really should be named Supply Depot Outpost . It's never really used like a regular checkpoint (though, on a small station like Chiron, the idea could work); most officers prefer to go on patrol rather than do guard duty here.

That's not to say it isn't useful though. Sometimes it's nice to be able to use a recharger without having to go all the way back to Security; same for the extra locker of Sec gear. The brig chute's great too; being able to send someone to the Brig without having to escort them the whole way there makes things so much more secure and so much easier. And it's great to have a miniature backup version of the Brig in case the regular one's been broken into/destroyed/rendered unusable for whatever reason.

The APC for this room is on the right wall, behind the locker of Security equiment.

Security Checkpoints are small outposts across the station where Security Officers can recharge their weapons and restock on supplies without having to travel all the way to the main Security Department, among other things. There's one in Escape, another east of Medbay, and a third above the Bar. Each one has some form of recharger, along with slightly different amenities:

None of these checkpoints have air vents or injectors. But you're just be visiting them for a short while anyways, so it sort of doesn't matter.

The APC for the West Hallway's checkpoint is in its top left corner, while the one for Medbay's is on the left wall. Escape Hallway Checkpoint doesn't have its own APC, since it's under the Escape Hallway's jurisdiction.

The only way in and out of Sectotzka's iron border is through this Security Foyer Checkpoint in the bottommost parts of the country. The checkpoint sees much traffic, and, unfortunately, much crime. Security Officers, the Detective, and occasionally Lawyers go through it on a daily basis, and imprisoned criminals are typically released through a chute just outside the checkpoint. Speaking of criminals, the checkpoint attracts delinquents who bait personnel into attacking to "train" them and is often target of thieves who want to steal weapons used by the Sectotzkan Security Officers.

Though its role is huge, its accommodations are small, consisting nothing more than a simple metal desk (reinforced, of course) with paper, pencils, a clipboard, and, in the place of a handbook, a SecMate Computer, given under a trade agreement with the Non-Aligned Pact member United Command. In addition, inspectors for this checkpoint are chosen by lottery, in the name of impartiality and equality.

As the only thing standing between Sectotzka and the rest of Atlas, the checkpoint's inspector must reject or approve entrants based on the Ministry of Admissions's ever-changing standards. One day, it may allow anybody who's on the crew manifest to enter. The next day, it may suddenly require a booklet affirming their presence on the manifest and departmental allegiance and permit stamped by an Sectotzkan officer. Some days, the Ministry may require it have a reason, some days ID details, many days both.

Standards respond to regional crises too. Bombings and theft may prompt random search policies, and particularly infamous crimes can result in the inspector getting involved in the manhunt.

Along the way, the inspector may encounter a number of curious characters, including smugglers, vigilantes, members of an highly mysterious conspiracy that dates back to the construction of Atlas, and a strange fellow with a "passport" from "Clownistan", who may be more than meets the eye.

There is no vent. Even air requires an access permit to go through here.

The APC for this room is on the top left.

Kondaru has three Security Checkpoints, found by the mercantile dock, escape arm, and public pod bay. They all have standardized designs, with small tweaks for space. They each have a security records computer for prisoner processing, an ID computer for civilian processing, a weapons charger, a phone, and a Mini-Brig for detaining criminals. Obviously, the brigs are only small enough for one person. If you need to fit more people, the red chutes lead directly to Security... just make sure you have an officer there ready to receive them, or you may end up with quite a problem on your hands. 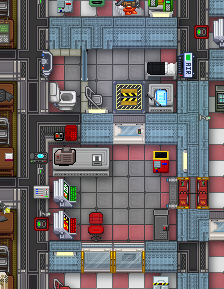 None of the checkpoints have a vent.