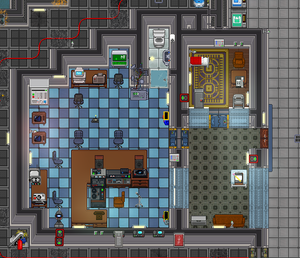 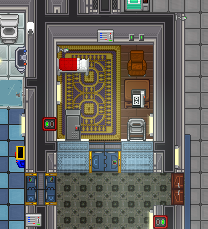 Your little bedroom too, in the same area. Don't forget your extra mic and comfy sweater.

Should the communications tower be taken offline, such as via a bomb, the system will attempt to fix itself by establishing an uplink to Oshan Laboratory. This takes about eight minutes, and in the meantime, all the aforementioned systems will be completely nonfunctional--period. It's more intense than a solar flare because the job-specific frequencies and station-bounced radios go down too. There is no way to repair the array or replace it if it gets damaged or taken out.

As Communications Officer, Nanotrasen has entrusted you with protecting that absolute disarray of a comms array.

Naturally, you don't get much in the way of weapons to defend it if someone tries to break into the comms office to destroy it. You do at least have a flash. It is mostly for when you get attacked, but it can work against common greytiders who break in just for kicks. However, it can be easily defeated by eye protection, and good luck using it against team of Nuclear Operatives (who all spawn with sunglasses) or a Blob (cannot be stunned at all). At least you can access the Security areas and use the SecTech, though actually trying to play Security is a bad idea. Moreover, the most popular method of disabling the comms tower by far is to bomb the maintenance area above the comms office, which you really can't do much against.

So, you're a Traitor. If you ever dreamt of a radio gimmick, and thought to yourself, "If only I had Antagonist privileges" or "I'd need traitor gear for that", then, well, here's your chance to make those dreams come true. You may not have any special job-exclusive items, and you may not be particularly deadly, but with Syndicate show biz, it's less about the body count and more about the ratings--and it's anything for the ratings...

So put on a good show! Don't be afraid to do anything--and we mean anything (within the Rules obviously)--to climb your way to the top and keep the fans entertained. Abduct some crew, force them into Russian roulette games or Saw-esque traps for freedom! Plant bombs around the station, and threaten to detonate them unless they answer pop culture trivia questions. Take hostages and threaten further violence unless the crew listens to your manifesto and completes your insane demands. For extra fun, mindhack some folks and/or subvert the AI and Cyborgs and order them to be accomplices/cohosts in your twisted shows. Break a leg!