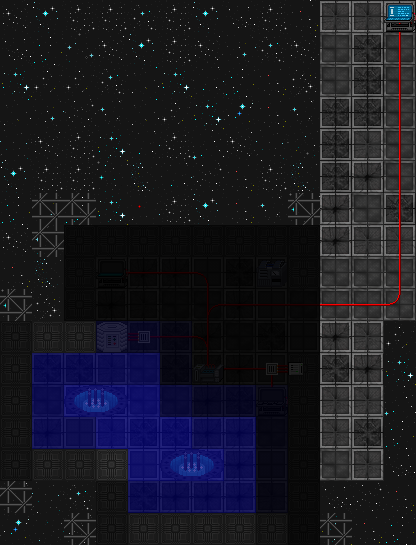 Before the Nuclear Generator came along, there were two mayor other attempts to make a nuclear-powered engine. Neither left prototype stage.

The first prototype nuclear engine was part of pre-modernization Mushroom Station, located in space west of Mushroom's Engineering deck and accessible by a retractable air bridge. If you had an admin spawn in the necessary materials and tweak certain variables, it was actually possible for the thing to produce power, while also releasing a deadly gas depending on the rods. Otherwise, it served no function but was still a nice place to stash bodies and loot you didn't want found. When Mushroom was partially modernized, the nuclear engine wreck got axed.

The second was intended to be the power source for Manta, like the real-life nuclear submarines that inspired it. The public playtests of the map showcased two huge turbines and a reactor core lifted straight from the original nuclear engine in Engineering, which were all at the time nonfunctional. Eventually, the engine would have used pipes carrying fluids and centrifuges processing nuclear ore (which at one point accidentally replaced the pathogen centrifuges in Pathology, when the nuclear ones still had a ChemiCompiler sprite). However, the mapmaker grew impatient, and the WIP nuclear engine was substituted with a singularity engine.

Many of the associated components live on, as setpieces all across the Debris Field and Adventure Zone.