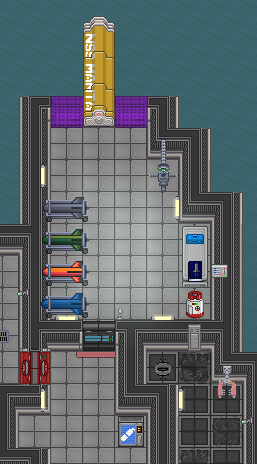 Torpedoes can be set off if you hit them with enough blunt force, generally in the range of five extinguisher wacks (i.e. 50 "health"). After this percussive priming the torpedo will then fly off in the direction it was facing. Hopefully, you are smart enough not to stand in front of the tip when you do this.

There are four types of torpedoes:

So, what can these actually be used for??

It's a room full of glorified bombs. Generally, whatever legitimate uses there are for other types of bombs, torpedoes have them too. More specifically, toxic and incendiary torpedoes can destroy huge chunks of a Blob, while explosive and high-explosive ones can help break through a Nuclear Operative barricade. A high-explosive can also take out a rogue AI, if you set it off at the right place (a good choice is a little bit north of Visitation); it's preferred you only do this if there's no hope of resetting it through the upload computer. If you're brave, insane, and/or possibly stupid enough, you could also try to use to them destroy a loose singularity.

By the Rockets' Red Glare

It's a room full of glorified bombs, almost begging to be used by an Antagonist such as you! Admittedly, there aren't a lot of torpedoes to use, but they're almost free. You don't have to learn complicated gas physics or gather many materials; all you have to do is get the suitable tools, and hack the doors into the Torpedo Bays. Their uses are plain and simple. High-explosive and explosive torpedoes blow stuff up, incendiary ones burn everything to the ground and are a fun way to ignite plasma gas fires, and toxic ones fill the air with poisonous gases that poison NT scum's asses. Don't forget: if you bash a torpedo enough, you'll set it off and send it flying in whatever direction it was facing.

Special attention should be paid towards high-explosive torpedoes. They penetrate walls, so you can use these to bomb places that you don't have access to. Set one off at near the entrance into Engineering and try to knock out the machinery keeping the singularity contained. Aim one towards the AI Chamber! Shoot one at the Clown Ship just for kicks! If you need more, you can go to the cockpit of the Syndicate Assault Vessel, and buy them from CARL from the rather steep but by no means unobtainable price of 10k credits each.