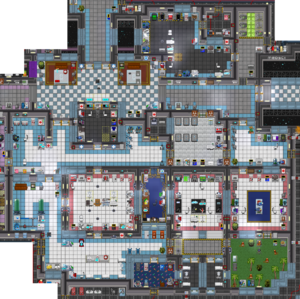 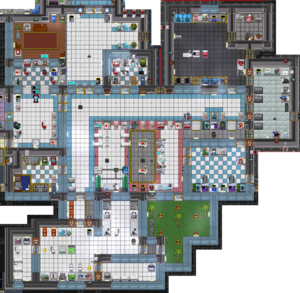 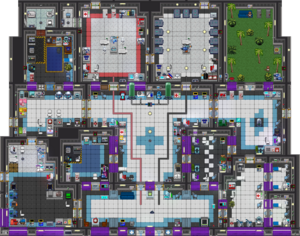 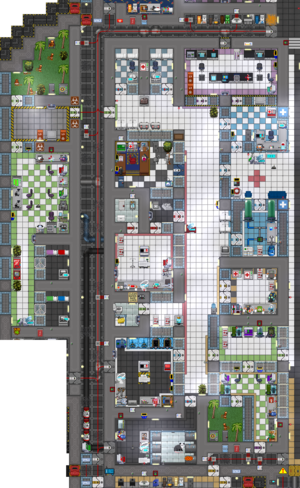 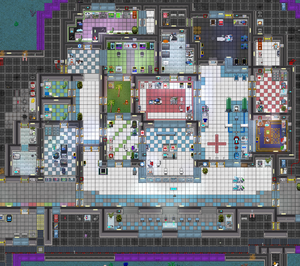 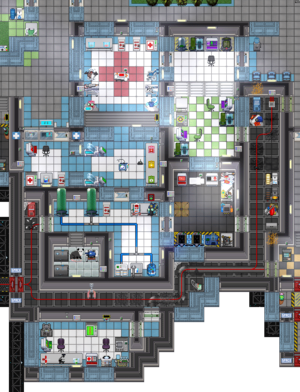 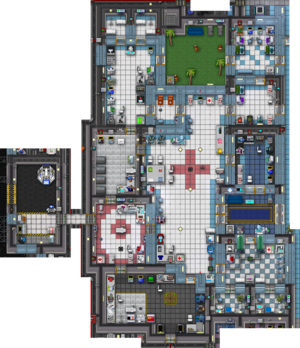 Easily identified by their starting labcoat and cool red and white jumpsuit, Medical Doctors treat the crew's sick and injured and attempt to revive its dead. Some doctors roam the halls as paramedics, while some stay in Medbay and take on any incoming patients. All are expected to have a good grasp of the various types of damage and common ailments, the appropriate medicines and surgeries for treating them, and the procedures for cloning the dead, or at least the ability to scream at the Geneticists or Roboticists to handle said dead for them, that you can use by typing:

Being a doctor in Space Station 13 is easier than being one in real life, but perhaps just as stressful. SS13 is a dangerous place, and you can expect many patients dropping by, sometimes with lives at stake. Medbay is a frequent target of Antagonist activities, doctors are often put under unrealistic standards and expectations, and sometimes you just see the worst in people. Nevertheless, being able to save people's lives--including yours--through good Doctoring is immensely rewarding, highly worthwhile to learn, and invaluable for everyone.

All these treatments are administered by simply clicking on the patient with the medical item in your active hand.

Medbay starts with a Head Surgeon. On any given round, there is a random chance that he will be a cardboard box or a medibot with a unique sprite. If he's a bot, let him treat minor injuries in the medbay lobby.

Your health goggles show you condition of everyone around you at a glance, and if you aren't wearing a pair as a doctor, you deserve to be fed to the roboticist. Equipping your pair of ProDocs with a health analyzer upgrade (check the medical vending machines) is also a good idea, because it makes performing a complete health scan of anybody within a 4 tile radius simply by examining them possible. The various handily-color-coded icons are explained below:

Is the patient bleeding? Dress the wounds with bandages or suture, then check their blood level. If it's low, inject saline and use a blood bag on them.

Saline will help stabilize an injured person. Styptic powder works against brute damage and silver sulfadiazine against burns. Charcoal is effective to treat toxin damage. In case of suffocation, use a salbutamol pill. Scan your patient by using your PDA or health analyzer and administer the appropriate medicine.

People who have slipped into critical condition are at risk of falling into shock, cardiac failure or other terrible things and will die rapidly without treatment. CPR will help to keep them properly oxygenated and slow down the deterioration of their health. Just take off their mask and your own and target them with the Help intent. A patient who is thrown into cryo without being stabilized will take longer to heal and may die. In emergencies, an injection of epinephrine or atropine can help to rapidly resuscitate your patient, but don't overuse them!

Between cryo, the various first aid kits and medibots, you have enough to treat most common ailments. For a more complex guide, check out Doctoring.

Setting Up the Cryo System 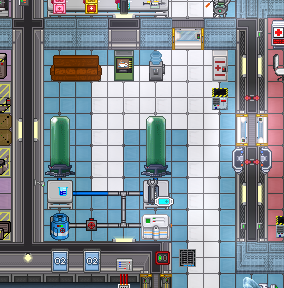 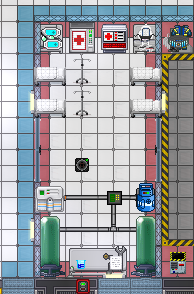 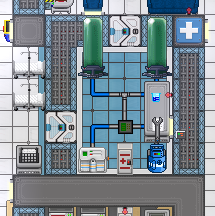 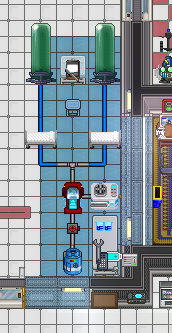 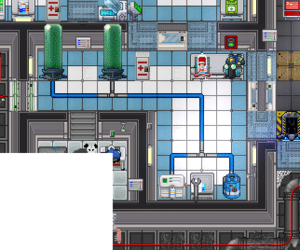 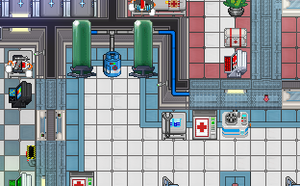 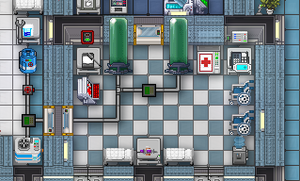 It's a good idea to invest a minute or two at the beginning of every round and start the cryogenic healing pod system, a machine that administers cryoxodone, a medicine with powerful healing properties at sub-zero temperatures. It's great at healing critically injured patients, but the cryo cells do require some setup to make full use of them. Make a habit of it.

Don't worry about the cryoxadone - it isn't used up unless there's someone inside the tube. If it does run out, you simply inject some in with a syringe or insert a fresh beaker of cryoxadone. However, leaving the chambers on causes a slow but constant gas leak. To avoid draining the O2 canister needlessly, leave the tubes off unless they're occupied.

It is also noteworthy that pure oxygen is not a requirement. Should you ever need to replace the gas supply, an air mix canister from emergency storage or the air hookups will work just as well.

So, you have an emergency on your hand? Don't panic and follow this checklist:

To stress the point, it is important that you don't forget to strip your patient of exosuits and headgear. Their body temperature has to fall below a certain threshold, which is unlikely to happen if they still have said items on, or cryoxodone won't work. Plain and simple. 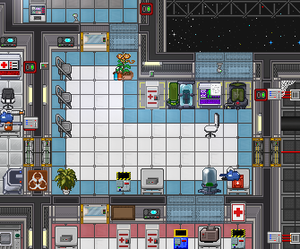 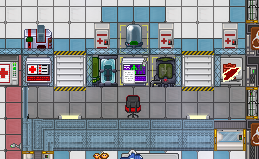 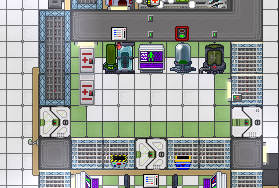 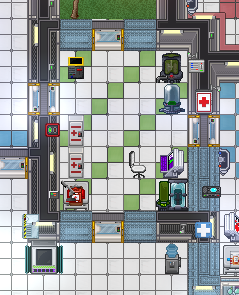 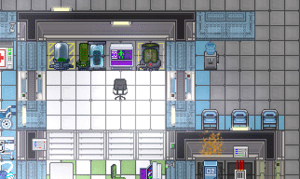 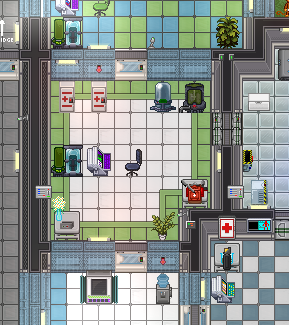 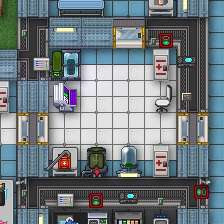 Sadly, you won't always be able to save the patient. This is where the cloning apparatus comes into the play, which was formally the geneticist's responsibility and is now open to all medical personnel.

To clone someone, simply go through the following steps:

Please note that you can scan bodies without a brain or even a head. Also, if someone comes in to get scanned of their own accord, they can climb in and jump out of the DNA scanner themselves. If someone has the initiative to come in and get scanned on their own, it is polite to pay attention to the cloner. If it has started to flash red, that means someone is ready to be cloned. If not them, then someone else will likely appreciate it. Alternatively, you could just check the cloning console every 10-15 minutes.

Once the cloning process starts, it normally takes about 2 minutes for it to complete. When a clone stumbles out, they are naked, and usually have some combination of toxin damage and brain damage. Charcoal and mannitol respectively will fix these problems. For increased efficiency, you can dissolve these chems directly into the cloning pod. For a very speedy cloning experience, additionally add potassium iodide and salicylic acid as well, or omnizine if you have access to it. Give them some new equipment from their old body if it's still around and send them on their way.

If someone is braindead or maybe was revived as a Cyborg, it may be of use to remove their cloner record so that it's easier to see and help people who do have active records in the cloner. This ability is restricted only to the Heads of Staff, so you might need to ask on your department frequency for help in doing this.

The cloning process won't always go so smoothly however. Sometimes, there's number of errors and problems in the process. Luckily, there's (usually) a number of alternatives!

The cloner comes with a "Advanced Genetic Analysis" option, toggled at its computer. Alongside some boosts to material regeneration and cooldowns at the geneticists' consoles when cloner's cloning someone, it makes the cloner copy any active genetic effects they had when they were scanned. It's rather nice in general, but it's particularly useful for people playing non-human races, e.g. lizardpeople, cowpeople, etc. Normally, they come out as humans after getting cloned, rather than the species they chose. Advanced Genetic Analysis rectifies this, so fishpeople pop out as fishpeople, roachpeople as roachpeople, so on and so forth. It slows down cloning somewhat though, so it's up to you if the effects are worth the longer cloning cycles.

In addition, the cloner can augmented with several modules. Some speed up the process significantly, some change the amount of biomatter used in each cycle, some even allow you to give clones a certain mutation. Check them out in your own free time.

If cloning is damaged or destroyed it can be possible to make a new one elsewhere, but unless some individual components were scanned first it might be tough.

At the end of the round, the game rewards you with XP. You gain XP each time you complete certain tasks, specifically:

This XP goes to your job level, and when you reach certain job levels, you unlock a few fun little items. Or, would, if they're implemented yet. Medical Doctor XP and Job Levels otherwise have no effect on gameplay.

As a loyal crew member, you can sometimes be assigned some strictly optional objectives to keep yourself busy while you wait for something to happen. If you complete your objectives by the end of the round, you'll get some bonus Spacebux and possibly earn some Medals too. As a medical doctor, you can expect to see the following:


Do not commit a violent act all round. Punching someone, or shooting them with a laser will cause you to fail. Disarms are still allowed.
Never use the Harm intent, basically. Like it says, disarm actions are still kosher.

Completing this objective for the first time gives you the Primum non nocere medal. That's Latin for "first, do no harm", which is a technically a different thing from this objective, but anyways, this medal unlocks a unique pattern for medical scrubs.

Apply at least 10 medical patches to injured people.
Just do what you normally do, and this objective basically completes itself. If for some reason you are lacking in people to treat, just punch yourself a few times and apply a few medical patches, if you don't mind wasting resources.

Completing this objective for the first time gives you the Patchwork medal, which grants access to the ability to re-texture a labcoat into a "medical labcoat" with a unique design.

Ensure that the cryo tanks are on and below 225K at the end of the round.
If you get this objective, ignore it until near the end of the round. When the shuttle is about to dock, turn the tanks on. If left on for the whole round, the connected gas canister will be drained fairly rapidly, so don't do it please.

Completing this objective for the first time gives you the It's frickin' freezing in here, Mr. Bigglesworth medal. Unlike the above two objectives though, it doesn't have a reskin or other reward tied to it.

Make sure you are completely unhurt when the escape shuttle leaves.
More specifically, have no BRUTE, BURN, TOX, or OXY when it happens--notice organ damage, brain damage, bleeding, and other damage types aren't counted. Even a tiny sliver will disqualify you, so don't be stingy. You also have to still be alive, so if you get gibbed at full health, it doesn't count.

Completing this objective for the first time gives you the Smooth Operator medal. There isn't a special reward or unlock associated with it, sadly.

The traitor medic has the right tools for quiet assassinations and all-out rampages. Emagging your hyposprays will let you load them with whatever you want, instantly injecting your targets with any variety of harmful chemicals. Your medical vending machine starts out with a few nice ones (such as sleep toxin), and more potent drugs can be made if you're able to slip into chemistry. Failing that, poison bottles are well-priced and a good option. Emagged sleepers will inject the occupant with poisons, which is best combined with hibernation mode.

Generally, no one will stop to question a doctor dragging an injured crew member or corpse, so long as it's towards medbay. You have equipment to restrain and anesthetize any downed victims, and the manufacturer in robotics next door can be hacked to make flashes. For the more overt killer, you can use the syringe gun, which draws harmful chem of your choice from an internal reservoir and fires them at people.

Also keep in mind that sometimes it is hard to tell the difference between a doctor who harms their patients through idiocy and one who does so through malevolence...