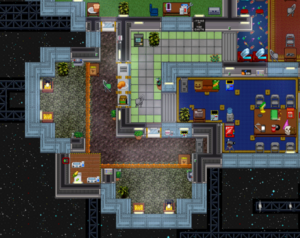 The Ranch, a little plot nestled at the end of the game den, in the station's northwest. 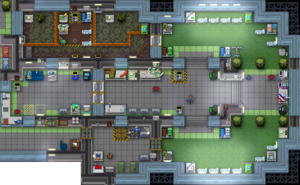 The Ranch (and your neighbors' farm) out in the station's northeast, just east of the Bar. 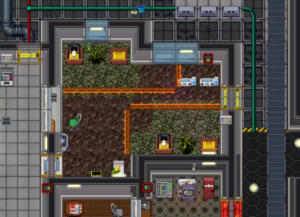 The Ranch, a cozy little plot out west, above the local saloon.

The Ranch, a modest tract in the south, above the sheriff's office. 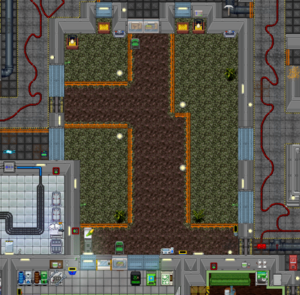 The Ranch, a vast expanse in the northern parts of the station, above botany.

Yeehaw, welcome to the Ranch! As a Rancher, your job is to look after and breed various animals in the Ranch. Currently, only Chickens are implemented for this; however, others may be developed further down the line. With a little love and attention, the Rancher can harvest produce and items not available otherwise, and also provide an alternate way to producing chemicals and ore.

The main aspect of Ranching is breeding and evolution. With the correct feed, affection and time, your flock can diversify into useful (and cute!) Chicken breeds, that can produce alternate goods or fill an alternate purpose. Chickens are closed source, and as such, their mechanics are still being discovered.

Your workspace is most of the time located directly attached to Botany, or very, very close. Botanists do not have access to your exclusive Chicken Club, so if you need assistance feeding them, you may have to lock the door open if you plan on leaving for a long time. You do have access to Botany, as you require specific feeds for your Chickens. You can either grow the plants yourself, or plead in despair as all of the trays are claimed for weed.

You have the following equipment available to you within Hydroponics and the ranch:

Bawk, bawk! Chickens are feathered friends that provide cluckloads of fun and plenty of Eggs, and can also be butchered directly into chicken nuggets, if you're willing to perform such a fowl act. All the Chicken breeds can also provide unique Eggs. But, most importantly, they are cute and ex-hens-sively pettable!

Chickens are under what's called "closed source". That means that while you won't find much info about these feathered friends on the public GitHub, you're free to share info about them with others. Because of this there may be information yet undiscovered, or mechanical values that are yet to be determined. Why not experiment?

To start raising Chickens, you first need to put an Egg into the Chicken Egg Incubator. Every map either has an incubator lying in a dedicated Ranch department room. As for Eggs, one always spawns on each Egg Incubator expressly for Chicken rearing. If you need more, it's usually easiest to ask for some from the Chef or order a Meat, Eggs, and Diary crate from Cargo. It's also possible to start with an Egg as a trinket or even grow your own.

After sitting in an incubator, Eggs become Chicks. Chicks eventually grow up into either a Hen or a Rooster. Both can eventually die of old age. Injecting ageinium makes chickens age twice as fast.

Almost all the time, your Chickens will grow up into Hens. Hens occasionally lay Eggs if there is an available nesting box around; there are some in the GardenGear, and the Eggs should be cleared out every so often because Hens do not like nesting boxes overcrowded with Eggs. Eggs are an important ingredient in many dishes, and given that each Egg can become a new Hen, they are essentially a renewable, theoretically infinite source of Eggs. Hens are quite passive; if you attack them, they tend to just try to run away.

Chicks can also become Roosters, if--and only if--the Egg in question came from a Hen. This means Eggs you obtain from roundstart incubators, the kitchen, or alternate sources won't give you Roosters! Roosters don't lay Eggs, but they do sit on Eggs in nesting boxes, allowing them to hatch, with a high chance of passing on their genetics to the resulting Chick. Roosters are also highly defensive; if you attack a Chicken, all the Roosters who witness it will go after you, just like with Monkeys.

All the while, Chickens need food to eat, specifically feed! To get feed, simply insert some sort of food, such as corn, into the Chicken Feed Grinder. Then, put the resulting feed on the floor or hand-feed it to a Chicken my clicking them with the bag. Different feeds may result in different Chickens.

There's more to hunger than simply keeping your flock of fowl alive; keeping your Chickens happy and well-fed has many benefits. Behaviour such as Egg-laying and hatching can be accelerated by keeping your Chickens happy! To see the effects, every time you pet a Chicken it will either ignore you or cluck. If it clucks happily, it would have laid an Egg, or hatched an Egg when it reaches that part of its routine. In other words, if your Chicken is clucking constantly when you pet it, it will lay a lot more Eggs than a Chicken that barely clucks at all!

You can keep your Chickens happy by feeding them their favorite foods and injecting their foods with drugs and alcohol. Petting chickens also makes them happier, though it's not as satisfying to them as a good meal. Chickens born to happy parents will also be happier to start. Conversely, you can make your Chickens unhappy by hurting other Chickens in front of them, making them vomit, shoving them, overfeeding them, and feeding them feed made from their own kind.

To see if your Chicken liked a feed, pay attention to their responses:

There are a number of Chickens you can make; some require you to make other breeds of Chickens prior to making them. Chickens that have special criteria for hatching, like chemical infusions of feed, have priority over happiness and unhappiness values. What this means is that if you had, say, a White Hen that you wanted to lay Henk Eggs, then feeding the White Hen Banana Feed would make sure you'd end up with Henk Eggs, even if the White Hen eventually becomes happy enough to start producing Brown Eggs.

Don't be afraid to experiment. Please report any interesting findings for experimentation!

You also spawn with a fishing rod

in your backpack. It is very easy to use! Simply click on a suitable tile directly next to you with the fishing rod in your active hand and sit still and wait. After some few seconds, something should appear at your feet, depending on where exactly you're fishing.

What counts as suitable tile for fishing? As you might expect, you can click on Seafloor tiles with a fishing rod to start fishing. There is also a fishing portal, that you can't get through, but a fish attached to the hook of your rod can. Both will yield adorable fish. These specifically are the item kind of fish often found in freezer rather than the alive, mobile fish inhabiting aquariums and the seas of Oshan Laboratory and the Trench. You can perhaps use your catch as feed or hand it to the Chef so they can make delicious seafood dishes. But both would deny you the ability to slap people with it.

But did you know you can also use the fishing rod on spatial tear tiles? They will give you space things. Literally, a space thing. Perhaps you will find them useful for your poultry endeavors.

The deep fryer works too--when there's something inside frying. If you try to fish on it while it's empty you'll fry it instead and then you'll really have egg on your face because that thing can't be replaced.

You can also fish in nuclear reactors, because "fission" sounds like "fishing", get it? You specifically need to stick your line in the reactor itself, where the fuel rods and other components are inserted; hopefully, you've bought some form of radiation gear and/or oodles of anti-rad medicine. The fish you can catch are surprisingly normal, but uniquely, you have a chance to fish up a slice of yellow cake, yet another pun.

You're a Rancher, and you're an antagonist; what can you do?

Want to infest the station with raptors and make Jurassic Park? Plant some rice, get some monkey meat from the Chef, and make the rice and meat into feed. To get Raptor Eggs, you need to get a White Chicken to lay a Brown Egg, hatch that Brown Egg, and get the resulting Brown Chickens to eat feed made from meat. Receiving rice feed and petting increase chance of a White Chicken giving a Brown Egg, so pet them lots and don't skimp on putting down rice feed. Once you've got a Brown Chicken, let it eat all the rice feed, and then cover the Ranch with meat feed. Pet the shit outta the Brown Chicken too, because that also increases the chance of getting a Raptor Egg. Make sure there is meat feed on all the tiles on the pen. You should get Raptor Eggs soon.

You might also consider putting your favorite destructive chemical mixes inside fragile Glass Chickens that can release those chemistry abominations upon their demise. Or, perhaps you'd be interested in unleashing an erebite-riddled flock of explosive Chickens on the station. 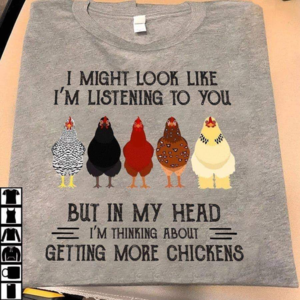