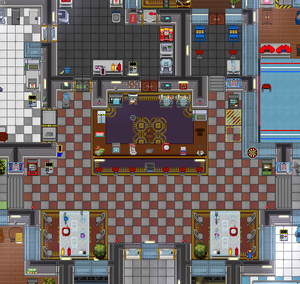 Your workstation in the northwest sector of the station. 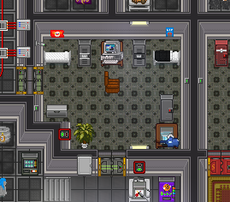 Your storeroom just a few paces above your bar. 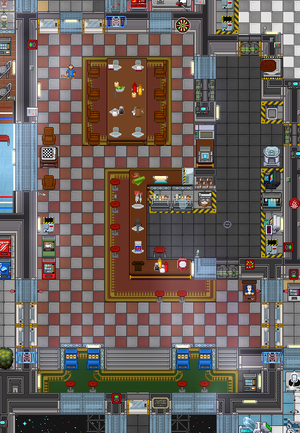 Your workstation, just a few steps below the Arrivals shuttle in the north.

Your storeroom, readily accessible from behind the bar counter. 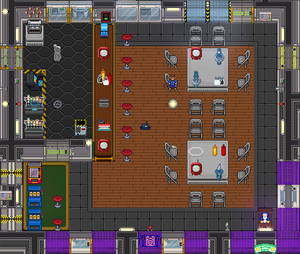 Your workstation, located in the western half of the station. Wave to all the fresh facing coming east from Arrivals! 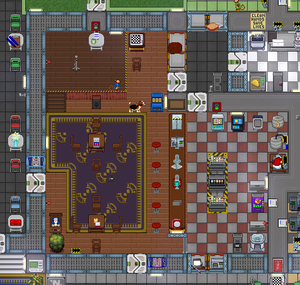 Your workstation, located almost exactly in the geometric center of the ship.

Your workstation on the west end of Oshan. 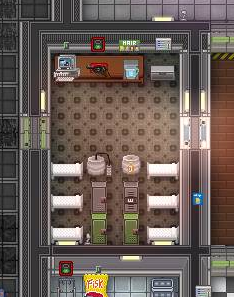 Your (and the Chef's and Botanists') storeroom, just a few steps north and then west of the Kitchen directly left of your workstation. 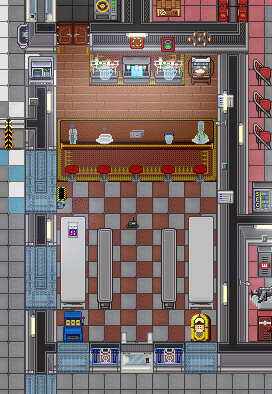 Your workplace, right by some friendly farmers and fresh new migrants.

The Bartender is one half of the catering staff, with the specific responsibility of getting everyone on the station ludicrously drunk and entertained while the whole place goes to hell around them. You have access to the bar, its array of dispensers, and your own office/booze closet behind the counter. It contains a vending machine filled to the brim with the finest alcohol credits can buy, other basic cocktail supplies and a wardrobe locker with various hats and suits should you feel the need to add a bit of flair to your antics. You also carry a special towel on your person, useful for wiping down used glasses and your counter if a mess was made.

You also spawn with body armor and a shotgun, presumably to protect you from the inevitably murderous fits of your drunken patrons. Unfortunately, you don't actually have a permit for it, so securitrons and GuardBuddies will freak out and try to arrest you if you're wielding it in their presence. Consider asking the HoP to add it to your ID.

As a Bartender, you will see the worst folk on the station. Your bar will become covered in blood and glass shards, and you're a likely bombing target for those fun-hating traitors. Plenty will clamor for access to your dispensers and other chemistry equipment, sometimes politely, often not.

That being said, it's a good beginner's job to learn some basic mechanics while still having a purpose.

Getting Your Crew Drunk

It's easy! Just put a bunch of glasses on the bar counter, stick them in any of the dispensers, and fill them up with the beverage of your choice. Whether it's vodka or assistant blood mixed with firefighting foam, you're still doing your job. The more daring barmen can also use their glass recycler to create various types of glasses from the shards of glass you might find around your bar from rowdy patrons (the recycler also accepts in-tact glasses). Just load in the shards and get out a new piece of glassware!

Part of the fun of being a Bartender is making new drinks and cocktails. Some of them are recognized by the game and given special properties, some are just for fun. Keep the crew entertained with new and increasingly cleverly-named drinks, keeping in mind just about any liquid you could ever want will go into a drinking glass. To this end, make use of the dispensers, chemistry equipment and the vending machines. Experiment!

You also have a still. In theory, this is here to ease the making of cocktails by loading fruits and vegetables in and getting booze and other liquids out. In practice, it's barely ever used. Don't let that discourage you though! If the botanists aren't too busy growing weed, they may be happy to send over some produce.

During your bartending career, you earn XP that persists across rounds for certain actions:

XP is also tracked on a BYOND leaderboard.

XP goes towards your Bartender level, and at certain levels, you unlock certain rewards. XP and levels otherwise has no effect on gameplay, e.g. it doesn't improve how good you are with your shotgun or how fast you mix stuff.

The Bartender is a great job for causing more passive chaos. Leaving poisoned drinks around both the bar and the station at large can be surprisingly effective; a lot of people will eat/drink anything they can get their hands on, and a Bartender who knows their chemistry can carry around a wide array of useful chemicals to get themselves out of a sticky situation should somebody catch on.

A traitor Bartender can be quite tricky, as the Bartender is not expected to be away from the bar too much, and you don't have a lot of access to places. However, the Bartender has one big ally - the sleepy pen. After being emptied by stabbing people with it, the sleepy pen may be refilled with anything, and the Bartender has ready access to some of the best choices. Stabbing the kitchen's monkey with it twice will empty it completely. To cover your tracks and keep the chef from wondering why his monkey is yawning and unconscious, force-feed it some vodka while you're stabbing it.

After the pen is empty, you can refill it with the strongest liquor you have available. One stab of the pen will be like drinking an entire glass of the liquor in one go, so anything as strong or stronger than vodka will instantly turn someone into a drunken wreck. After someone starts puking on your floor, you can drag him off to get some Lime-Aid, when in reality you duck into your storeroom to strangle your victim to death. This works even better if you also order a voice changer, which would let you strip the victim clean and assume his identity.

You also have a complete set of chemistry machinery at your disposal, so you don't necessarily have to stick solely to booze. Unstable mutagen for instance has a simple recipe and works well in combination with Bo Jack's or another drink strong enough to knock someone out quickly.