The thermoelectric generator (TEG) is the main source of power on Cogmap1, Cogmap2, Clarion, Atlas, and Kondaru. It generates power via the thermal interaction of hot gas and cold gas inside the generator. In order to create and maintain a supply of hot and cold gas, two separate loops of gas pipes move through the TEG: The hot loop and the cold loop. As their names imply, the hot loop has equipment designed to heat up the gas within, and the cold loop has equipment designed to cool down the gas within.

Parts of the TEG 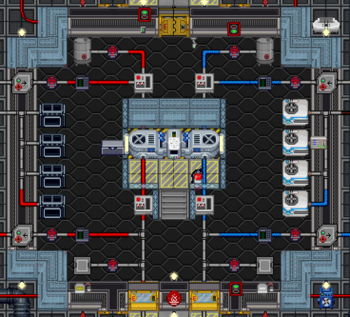 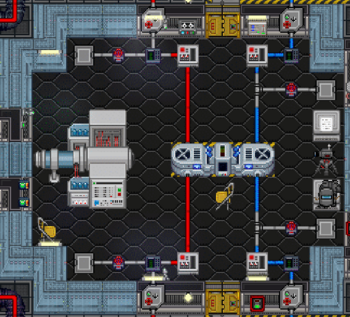 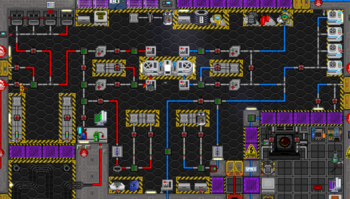 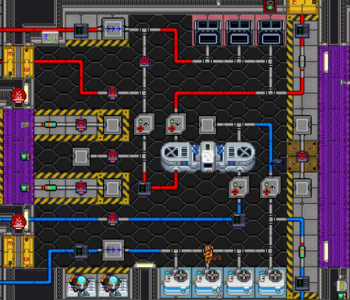 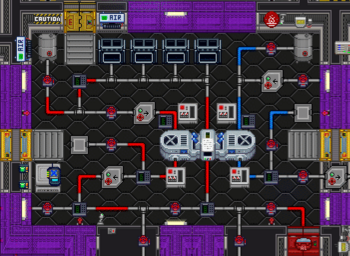 The TEG core itself is what makes the electricity. It functions by taking a part of the heat energy conducted between the hot loop and cold loop and converting it into electrical power. The central part of the TEG contains a status terminal, which can give you stats on the current power output, the pressure of the inlet and outlet of both gas loops, and the temperature of both gas loops. The graphic displayed on this terminal represents the current power generation of the TEG. Even the graphics that seem to indicate danger, like skulls and explosions, are only indicative of power output and are not a cause for concern.

The TEG core also features some warning lights next to the blowers. These lights will be blue when blower status is nominal. If the blowers are consuming more power than the APC is receiving, the lights will turn yellow when power is expected to fail within the next five minutes, and will turn red when power is expected to fail in one minute. Due to the questionable math involved in power calculations, the lights turning yellow should not be cause for any concern unless it does not turn blue again after a minute or so.

The turbines on the left and right sides of the TEG are gas blowers designed to help increase the flow of gas through the TEG. Using a multitool, their target minimum pressure can be set, and they can be turned on and off. While on, the blower will attempt to pull gas through the pipe in order to maintain at least as much outlet pressure as the specified value. They consume power from the local APC while active, with the power draw being determined by the the difference between the outlet pressure and the inlet pressure. Larger pressure differentials require more power to push gas against.

The maintenance panel on the blowers can be accessed by using a screwdriver on them. Each blower contains a lubricant tank, which starts filled with 200 units of oil. The lubricant tanks can be emptied by using a wrench on them to open the drain caps, which will leak the existing lubricant onto the floor. Remember to close the drain caps before adding new lubricant in order to not waste it.

The quality of the lubricant effects how effectively and power-efficiently the blowers are able to operate against a pressure differential, with more slippery chemicals such as space lube and organic superlubricant providing greater efficiency. The total blower boost from the lubricant is based on the quantity and quality of the lube, meaning that filling the blowers to capacity will be more effective.

Other chemicals may do even more things aside from just lubricating the blowers. For example, pyrosium or cryostylane reacting with oxygen in the blowers will change the temperature of the gas that passes through the blower. 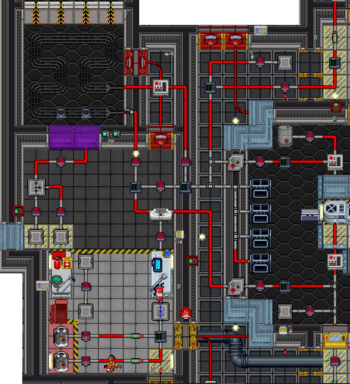 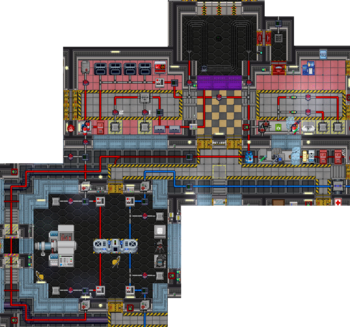 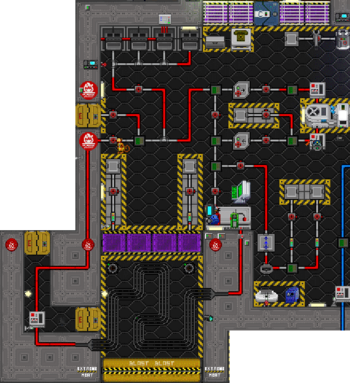 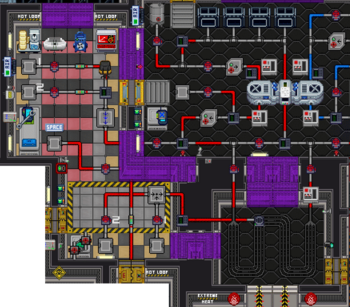 The hot loop is all of the pipeworks and equipment dedicated to heating gas and pushing it through the TEG. It features two gas tank ports designed to inject plasma into the hot loop pipes for the purpose of conducting thermal energy. In order to raise the temperature of the gas, the hot loop comes equipped with furnaces and a burn chamber. The hot loop pipes are a distinct red color, as are the floor tiles in most hot loop rooms.

The furnaces can accept any flammable solid as fuel. The most readily available is char, but plasmastone, weed, paper, and even corpses can be used as fuel. Different types of fuel do not burn hotter, though more flammable things will fill up the furnace more than less flammable things. The furnace heats to roughly 3200 kelvin when full, and starts to notably drop off in temperature when less than 2/3 full.

Do note that the furnaces attempt to force the gas in the loops towards their output temperature, regardless of whether this means heating the gas or cooling it. If you have a decently hot chamber burn running, running the furnaces will actually cool your hot loop down.

The burn chamber is the other method of generating heat in the hot loop. Using the combustion of plasma and oxygen over a hot loop radiator, it can create significantly higher temperatures than the furnaces are capable of. Like the hot loop pipes, the burn chamber has two gas tank ports designed to add gas to the chamber. Unlike the pipes however; these connector ports feed into a special gas mixer pump before reaching the burn chamber. Using the associated mixer pump control terminal, you can set the ratio of the contents of the two gas tanks and the pressure at which they are released into the burn chamber. While experimental burns may benefit from more precise mixer settings, leaving the pump set to a 1:1 ratio of oxygen and plasma at atmospheric pressure (101.325kPa) will ensure a long-lasting and hot burn.

Do note that the burn chamber is not perfectly insulated. A particularly hot burn will heat up the chamber walls, causing heat to conduct out of the chamber and into the surrounding areas. While the heat shields button to deploy shields over the observation windows may help somewhat, it is common practice to use an RCD to cut holes in the floor of the surrounding rooms, venting the engine room and preventing it from spreading dangerously hot gas to the rest of the station. 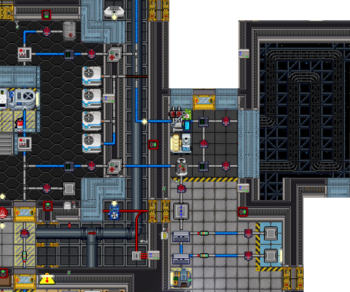 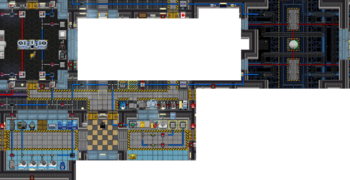 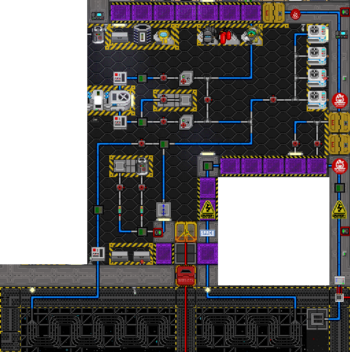 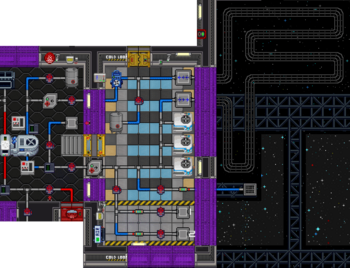 The cold loop is all of the pipeworks and equipment dedicated to cooling gas and pushing it through the TEG. It features two gas tank ports designed to inject plasma into the hot loop pipes for the purpose of dissipating thermal energy. In order to lower the temperature of the gas, the cold loop comes equipped with a space radiator and coolers. The cold loop pipes are a distinct blue color, as are the floor tiles in most cold loop rooms.

A section of the cold loop exits the station in order to flow through radiator pipes in outer space. Due to the extreme cold of space (2.7 degrees above absolute zero, to be exact), this radiator is able to cool the gas in order to dispose of the energy transferred into it by the hot loop. There is nothing user-configurable about the radiator, other than making sure to open the valves so the gas can actually reach it. 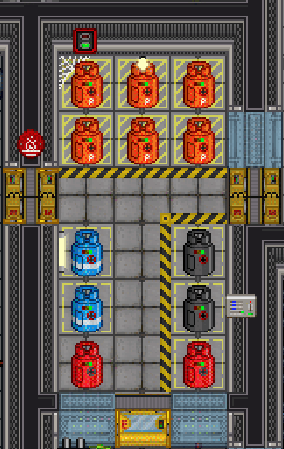 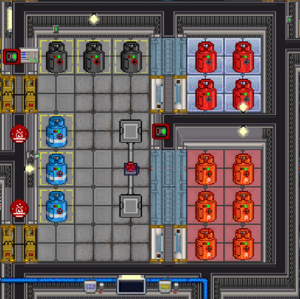 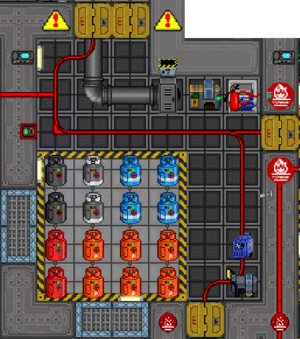 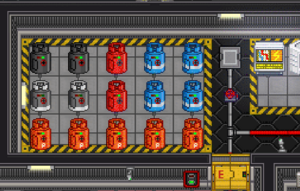 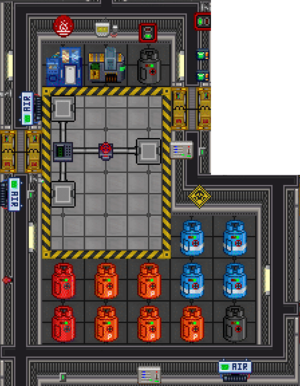 Gas storage is where all of the canisters of gas that you may or may not need in order to run the engine are stored. It also contains some other helpful equipment, such as air scrubbers and the gas extractor.

The blood of a functioning engine. Plasma has an absurd heat capacity compared to other gasses, making it extremely efficient for moving thermal energy through the pipes. It is also quite flammable in the presence of gaseous oxygen, which makes it vital in the burn chamber too. However, plasma's volatility means that if hot plasma were to escape from a ruptured pipe, it would combust rapidly in the air and lead to a massive fire in the engine room.

The stuff you breathe, and also vital for combustion to happen. If you are running the burn chamber, you will need some of this alongside plasma in order to get an actual fire.

The other stuff you breathe, and also vital for literally nothing. Perhaps an NT executive mistook some of these useless red canisters for the extremely useful orange canisters of plasma, causing them to be included in the engine gas storage room by accident. This gas has no use at all, and has a terrible heat capacity.

This invisible, asphyxiating gas has no usage in combustion and has a subpar heat capacity, though certain "motivated" crew members may find some use for it as an area-denial weapon with a bit more subtlety than a full-on plasma flood. It is more commonly seen as a byproduct of combustion in the burn chamber, where managing carbon dioxide through usage of the chamber exhaust vents or other means is important to ensure that it does not smother the burn and extinguish it.

The purpose of the following two startup guides are to offer a simple explanation of how the engine may be set up to generate power. These setups are by no means even close to optimal, and instead favor stability and ease-of-setup.

These steps will guide you through how to make a basic char burn in the furnaces. If the round lasts longer than 45 minutes or so, the furnaces may need refueling to maintain output levels.

These steps will guide you through how to make a basic plasma burn in the burn chamber.

These are various miscellaneous mechanics about the TEG that are not important for basic setups. However, understanding some or all of these will be immensely helpful in designing TEG solutions that generate impressive power levels or even infinite exponential growth. With the right know-how, you can earn millions of credits from the PTL and even overflow the defined list of metric prefixes for output wattage. If any of this piques your interest, read on.

Disclaimer: None of this physics knowledge is required in order to be an effective engineer, but it may help you to understand why certain things about the TEG are true and how you may more effectively manipulate it in your favor.

Gasses in Space Station 13 roughly obey the ideal gas law, which is a physics equation detailing the behavior of an "ideal" gas: that is, one composed of volumeless particles that do not interact with each other. The ideal gas law is defined as:

More simply put, PV = nRT. A further breakdown of each of these values:

At temperatures greater than 900 degrees kelvin and in the presence of plasma and carbon dioxide, two gas reactions may happen.

Molitz ore comes in two varieties: A white main variant, and a purple "beta" variant. Both varieties will release oxygen when struck or exposed to high temperature, but the beta variant is of special note: In the presence of plasma above 500 degrees, it will also release a small amount of oxygen agent B, a gas which allows for fires to burn much hotter than normal.

The engine has an internal "grumpiness" score, which goes down over time or especially when output is low. Grumpiness does very little aside from making the engine make rattling noises periodically. However, if grumpiness reaches a very high value the engine may begin to experience violent paranormal activity. Preceding a paranormal event, a CentComm announcement will warn engineers to feed the engine something that it likes, such as weed. This serves to raise make the engine happier, possibly preventing the situation from escalating. Burning corpses in the furnaces or putting pure hugs or pure love in the lube tanks will also serve to make the engine happier.