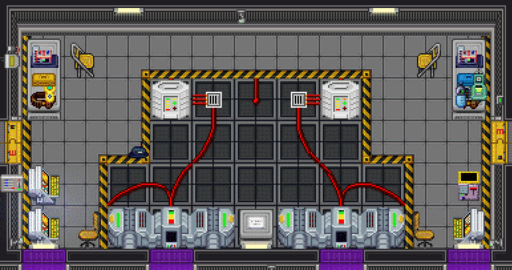 The catalytic generators are the main source of power for Nadir. They generate power by exposing cathode and anode rods to the acid sea, forming ions which can be used to generate electrical power. However, the rods degrade over time and will need to be periodically replaced to maintain power output. The anode rod goes in the left side of the engine, and the cathode rod goes in the right side. There are four engines, two in the northernmost and southernmost areas of the station.

Rods can be manufactured at a refining nano-fabricator, which can be found in the refinery or in engineering. They require one unit of a material, and the material must be metallic. The material properties of the rod determine its effectiveness as a cathode or an anode. Furthermore, the material's chemical resistance determines how rapidly it degrades over time. In order to obtain materials, one could use the Harmonic Siphon, which both engineers and scientists can access. Alternatively, engineers have access to mining tools and may to descend into the trench and mine ores the old-fashioned way.

The output of a catalytic engine is the lesser of the output power of the cathode and anode rods. The output power of a rod is determined by its condition (a number that starts at 100 and progresses towards 0 as the rod corrodes) multiplied by its efficacy (a positive number that represents how effective the materials are) multiplied by ten. Using this formula with the best possible rod formulations and perfect rod condition, we find that the maximum possible engine output is 977 kilowatts.

The efficacy of the cathode rod is determined by its hardness and density. Optimally, the cathode has 5 density and 5 hardness. The efficacy formula places more importance on density than hardness, as detailed in the tables below:

Due to not being a metal, pure claretine is not useable as an anode rod. Fractional stats of alloys are rounded down, meaning that some combinations that might intuitively improve the rod efficacy actually do not. It is currently impossible to make a material that has 9 electrical and is an energy source.

Anode and cathode rods are corroded as they generate power. This occurs by multiplying their condition by a decay ratio every time the power grid is calculated. The decay ratio is determined by chemical resistance, as shown in the following table: