The Geothermal Engine is the main source of power on Oshan Laboratory. It generates power by tapping into the natural heat of tectonic hotspots on the ocean floor.

Parts of the Geothermal Engine

Locating and pinning hotspots and connecting vents from them to the power grid is the primary objective of the engineers running the engine on Oshan. At the beginning of the round, 43 hotspots are spread about the map, and their starting locations are visible by using the "Trench Map" button on all PDAs. These hotspots periodically move, which causes an earthquake where they are. These earthquakes will move dowsing rods along with the hotspot, allowing you to keep track of them as they move.

Dowsing rods are used to locate the center of a hotspot for the purpose of pinning it down and building a capture vent on it. When you deploy a dowsing rod on the ground, it will beep and state a number if it is within a 10 tile radius of a hotspot. That number is an estimated distance to the center of the hotspot: if you deploy it somewhere else, the number will probably be bigger or smaller. However, it is not entirely accurate. The motion of a hotspot causes all of the tiles between its current location and next location to read as being zero tiles from the center. You can tell when youve found the true center of a hotspot because the dowsing rod will make a much higher-pitched beep when you place it on the correct tile. The image below illustrates the inaccuracy of dowsing rods (the red square is the true center, the arrow is the direction of motion): 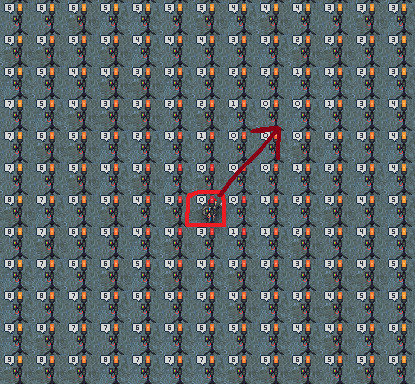 Stomper units can be used to pin down a hotspot by stomping within a tile of its center. Pinned hotspots will no longer move or cause earthquakes. If you stomp outside of that range, the hotspot will quake and move away from the stomper, which can be used to slowly but deliberately move hotspots. When the stomper pins a hotspot, it will emit a beep and say that it pinned a hotspot.

Right clicking a stomper and selecting from the context menu will allow you to toggle it between single and automatic modes. In single mode it will only stomp once per activation, whereas in automatic mode it will continue stomping until activated again.

Engineering also has access to stomper boots, which can be worn and activated to stomp a hotspot. They slow you down immensely when worn, so if you plan on using them it is best to keep them in your bag until they are needed.

After pinning a hotspot in place, vents can be deployed to harvest electrical power from it. To deploy a vent, first use a Power Shovel to dig a hole where the hotspot was pinned. Then, simply click the hole with a vent capture unit in-hand (or drop the vent unit and click-and-drag its sprite onto the hole) to deploy it. Once deployed, it will need to be wired into the SMES units to get its power to the station grid.

Whether naturally occurring or caused by an earthquake, holes onto the trench may pose a hazard. Falling into one will cause medium BRUTE damage, but the real danger is being stuck with no good way out. Hostile creatures and syndicate drones make it a dangerous area, and if you don't have a dive suit you will take rapid BURN damage as well. Your power shovel can dig through basic rocks, meaning you may be able to make it to the sea elevator and catch a ride back to the station. Carrying a Sea Ladder will also allow you to climb back out of the trench in the event that you fall in a hole.

Obviously, you cannot breathe the ocean. Carrying an oxygen tank will be necessary for ocean excursions, and you will need to monitor its pressure in order to not be caught in a bad spot with no air left. It may be worth carrying a spare tank in your backpack for emergencies.

Having multiple hotspots pinned on the same tile will multiply all of their power outputs by (1 + number of hotspots / 2.3). Each hotspot causing a multiplication of all hotspot strengths causes output to scale exponentially with hotspot stack size.

Building multiple vents around a hotspot will reduce the output of any one vent, but will collectively yield more power than previously in most cases. Since vents give less power the farther they are from the center, it is optimal to build any new vents in a square formation around the center of the hotspot. All vents need to be on top of a wire for them to add power to, but they do not need to be on a wire terminal.

Mining out the stone in the area of the trench under the hotspot will increase its power. You will know you are digging under a hotspot when the rocks emit sparks as they break. This will also increase the destructive power of the hotspot's earthquakes as it travels, so it is best to do any undermining after you've already locked it in its final position.

Usage of Controlled Demolition Pipes and Sea Ladders will aid in reaching the area of the trench that needs to be mined out.