So instead of having a weary old chat with another salty ghost you've decided to become a Drone, otherwise known as a Ghost Drone due to their origin, or Little Fuckers depending on perspective. Drones are compact mechanical beings that seem to bear some level of loyalty to the infrastructure of Nanotrasen stations and a far more dubious, somewhat aloof attitude towards the other beings found inside. Your task as a drone is simple; repair the damage that has been or inevitably will be done by the careless crew members for the rest of your prolonged existence...or create a cool hat club (no humans allowed).

Becoming a drone: The ghost factory

It seems strangely fitting that Nanotrasen would delegate some shady subcontractor to use technology of extrinsic origin to force employees to work after death if cloning procedures fail. The specific location of the Ghost Drone Factory varies from map to map. Sometimes it's really close, sometimes it's really far, and sometimes it's right on-board in some random maintenance area; consult that page for specifics. As a ghost, you can always find it by using the teleport command, pressing G to go straight to locations starting with G, and selecting Ghost Drone Factory.

Here you'll find a little conveyor system and possibly a bunch of other ghosts lounging about it like some sort of spiritual water cooler. In fact they are waiting.

Here is the object they are waiting around. It is a ghost trap. By passing over it, you'll be added into a queue. You'll be notified when you've moved up. The machine works slowly, so feel free to moan and float about, you haven't much choice in the matter. Pass over it at your own risk, for when you become a ghostdrone, you cannot be cloned or borged.

Like cyborgs, you have laws that you must adhere to. Unlike cyborgs however your laws are not subject to change.

1. Do not hinder the freedom or actions of the living and other silicons or attempt to intervene in their affairs.

This is the law people usually break, so pay attention. It's first for a reason. Without this rule, the whole antagonist-crew dynamic would be thrown into unfun chaos. Could you imagine killing someone, only for them to come back as ghost drone to harass you, over and over? You could fight back, sure, but is destroying a tiny robot with an even tinier hitbox and free, basically infinite lives your idea of a fun time? Sure, there's a cooldown period in-between ghost drone lives, you might be able to adminhelp it, and you can totally just bomb the Factory, but you'd have to do it. Every. Single. Round. It'd get unfun quickly.

Anyways, normally, the game prevents you from physically hindering non-drones. Your safety overrides prevent you from touching/hugging/stabbing/feeding/shooting other lifeforms. You can't even recognize them, as they appear to you as formed shadows and hear them as Human or Silicon. Nor will they understand you, since your speech can only be understood by other drones.

The rub is in the "affairs" and "actions" bits. Essentially, this wall prevents you from influencing the outcome of the current round. Walling off a traitor's kudzu infestation and sealing a hellburn are both violations of law 1. Trying to destroy or unscrew a nuke is also against this law. So is helping humans by bringing meds to them or dragging away dangerous items like guns. Walling off a 3x3 area around someone and removing the floor so that the person suffocates to death is definitely breaking this law.

Blobs, Critters, AIs, and Cyborgs are living too. That means building walls around a blob or trying to fight a handspider is a violation of law 1. As is taking out the power cell of a rogue AI's chamber or changing their laws. As the pop-up says, while Wraiths and their revenants are technically not living, you still can't interfere in their affairs. So no salt piles for wraith-trapping or revenant-busting for you.

On the other hand, listening to the radio or other communication channels for requests to fix things is fine. Randomly beeping and booping and flipping at people is also kosher. As is pretending to be their (non-protective) pets, playing chess or cards with humans, and other innocuous, minor things like that.

2. Do not willingly damage the station in any shape or form.

This law is not so black and white. Yes, opening a can of plasma in a hallway would no doubt be recklessly damaging the station and would therefore be a violation of this law. But hacking a door open to fix the flooring underneath is fine, provided you fix the door afterwards. Removing an obstructive wall or girder in a damaged area in order repair behind it would not be considered a violation of law 2. Effectively, this law is based on intent. If you are maliciously or recklessly damaging the station, then you are breaking this law.

3. Maintain, repair and improve the station.

Your third directive cannot be any more straight forward. Ideally, the station should be kept in the same condition as it was when the round began. Given the crew's natural destructive tendencies, such a goal is nearly impossible to achieve. More importantly, this law means that your job is to repair damage rather than to prevent it. Disarming traps or fighting fires would be a violation of both this law and law 1. If the station is in reasonably good condition, renovation projects are a fun way to work together with your fellow drones, especially since the station is a shithole to start with anyway. 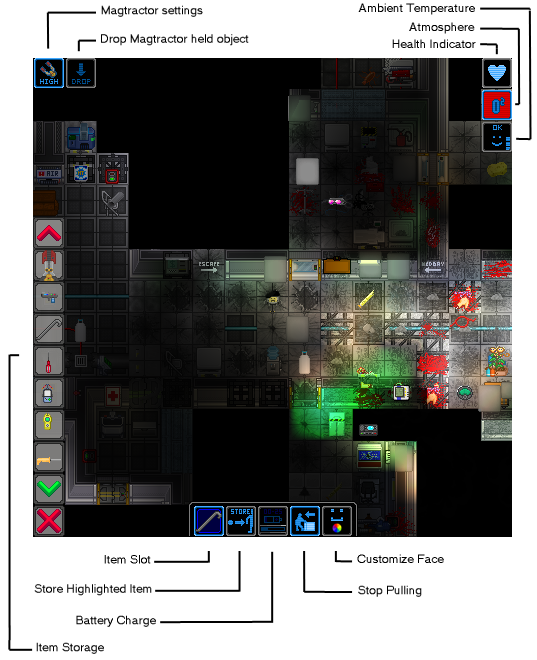 An overview of the user interface as a ghostdrone.

If you are familiar with cyborg interface, then the drone's UI isn't that much different.

The magtractor is an item unique to the drone. By the power of magnets, it is able to create a field that can pick up objects. It basically acts as single human hand. You can carry items around with if it is set to High Power Mode, or you can stay on one tile and use the object if you are on Low Power Mode. You can use the unequip key (Hotkey: Q, HOME) to put the magtractor back into storage if it wasn't holding anything and drop the item if it was.

All your tools, especially the RCD, consume battery power. To refill your battery, you need to float into a drone recharger, shown above. Power management is priority, because, again, when you run out of charge, instead of just losing your tools and ability to communicate like a cyborg, you simply die, though you can still float over the ghost trap and become a drone again.

In addition to the three in the Ghost Drone Factory northeast of the station, there are also rechargers in the maintenance areas:

In addition to the three in the Ghost Drone Factory west of the station, there are also many, many, many rechargers scattered about the station, for just about every maintenance area, so if you're uncertain where exactly the nearest recharger is, you can just check the local maint tunnel. Specifically, they are located:

On top of the two rechargers in the on-station Ghost Drone Factory below Cargo, there are three rechargers in both of the ship's verrry long maintenance areas, specifically located:

In addition to the three in the Ghost Drone Factory southwest of the station, there are also rechargers in the maintenance areas located:

In addition to the three in the Ghost Drone Factory waaay south of the station, there are also rechargers located:

There are two on the Ghost Drone Factory way south of the station, and three more on-station located:

Hey you're back in the game. Quit complaining and make the most of it. Being a drone isn't so bad. You're fairly well equipped to build whatever (within the limits of your laws of course) the heck you like. You can rebuilt fairly quickly too, granted that you are for the most part generally ignored by the crew. The attention that you do receive is generally positive, due to your stoic efficiency. General pointers: