What is it about clowns? They seem to be a happy enough bunch, delighted to suffer a pie-in-the-face or a seltzer-down-the-pants just to make us laugh, but what dark compulsion drives these men to hide behind their painted-on smiles and big rubber noses? What madness turns a man into a clown?

— Dave Louapre and Dan Swestmen in A Cotton Candy Autopsy

The unofficial mascot of Space Station 13, alongside the Staff Assistant clutching a bloody toolbox, the Clown is a figure of comedy, tragedy, grief, vengeance, and occasionally, pants-shitting terror. To put on the squeaky red shoes is to enter the long ranks of those who have honked before, ever seeking for a new way to entertain and infuriate. Are you a bad enough dude to be the job everybody loves to hate?

BIG OL BOLD TEXT WARNING: Clowns are given some slack to fuck with people, but if you break the rules about outright griefing, expect to be murdered at best and yelled at or banned by admins at worst. If what you're about to do will get somebody hating you with the seriousness of, say, a sitcom nemesis, it's probably fine, but if you're going to actually ruin someone's round, you should probably stop before you get banned. Unless, of course, you're a traitor.

SIMILAR WARNING: You don't get to kill the Clown just because he's being the Clown. Period. If he's being absolutely awful as described above, or actively trying to murder you, then go ahead and beat the shit out of him, but don't seek out and abuse the Clown for the crime of existing. Unless, of course, one of you is a traitor.

Zen and the Art of Honking 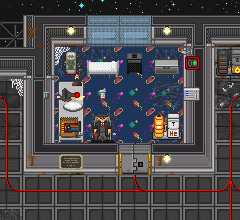 Your Clown Quarters, above the natural birthplace of slapstick. 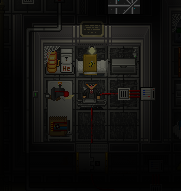 Your Clown Tent, just above the natural intersection of violence and comedy. 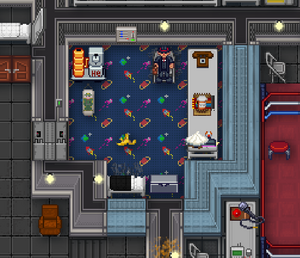 Your Clown Hole. It's located in the south east near the Warrens, a place where clowns can be free. 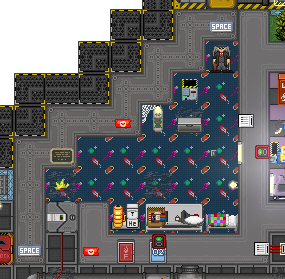 Your Clown Hole, next-door to the lair of Super-Slipper. 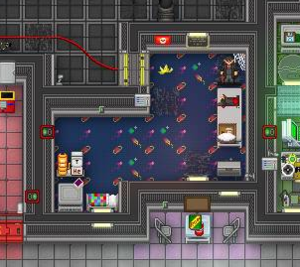 Your Clown Hole, home of the Loafers. Your dirty fief of a Clown Hole. Watch out for flying crates as you make your way to the hidden entrance! 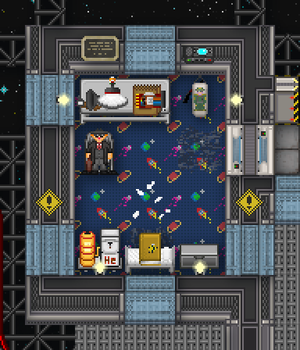 Your Clown Hole, in the maint behind the News Office.

Newbie Clowns do nothing except stab themselves in the eyes with bananas and scalpels before tripping on their own banana peel and sailing out the airlock. Bad Clowns annoy people enough that they get hurled into space. Good Clowns are either actually funny or enrage everybody and never manage to get caught. Great Clowns are creative and entertaining enough with their japes that nobody ever has the heart to kill them.

Clowns have no official responsibility, no access beyond maintenance access, and often no hope of surviving a round. That doesn't mean there aren't perks to the Honk Life, though! You start with your sweet clothes, shoes that slip you (unless you walk) your ID (doodled in crayon), an unpeeled banana, a bike horn, a "funny" (fanny) pack instead of a backpack, a box full of party balloons, a unique towel that is edible which can be vomited back out, and your unique PDA that's as slippery as a banana peel. There's an inherent downside every Clown spawns with, though - a genetic-level incompetence with all sorts of basic tasks, like "not poking your eye when peeling a banana," "holding the stun baton the right way," and "not stabbing yourself in the eyes with scalpels during surgery." A Clown that tries to fill in for a station-critical role is often in for a world of pain, but it'll often be pretty funny to watch.

So, with a startling inability to do anything useful without injuring themselves somehow, what's a Clown to do? Make things interesting for everybody else, that's what. You are what the common grayshirt longs to be, to the point where you'll probably have to watch out so one doesn't mug you for your costume. You can do any gimmick they can, albeit more incompetently, but any Clown that takes off their costume is a shameful Clown. In addition, you can use your bag of tricks to screw with people, make terrible puns and crack terrible jokes non-stop, see how many times you can hit the Captain with a pie before he arrests you, lay banana peels just out of sight in high-traffic areas, twirl (Hotkey: Ctrl + I) cans of generic and name-brand cola to make them spray on people, and more! Or, if you don't want to get murdered prefer brightening the station's day, try doing some of the other jobs earnestly but in a harmlessly comically inept manner, tell good jokes, and use your own unassuming nature to save the entire station single-handedly by making the operatives think you're harmless before you blind one with a pie long enough for the mob to arrive.

It should also be noted that native-born clowns are the only crew members in Space Station 13 who can juggle. By holding an item in one of their hands and either pressing Ctrl + I or using the 'me "twirl' or 'say "*twirl' emotes, a clown can begin juggling. If a clown is juggling, any item thrown at a clown will be automatically added to whatever mess of items they're currently juggling. This detail of juggling once caused a very dramatic hilarious incident involving a dead monkey, a botanist, two scientists, a clown, and a portal to a plane of non-existence and mortal suffering powered solely by juggling.

On the less reality-bending side of things, clowns also are naturally talented at ballooncraft. While most crew members can only hope to fill balloons with chems and throw them at people and maybe make some helium balloons, clowns can activate an empty balloon in-hand to blow into it and twist it into a cute lil balloon animal. Naturally, balloon color, though not shape, affects how it'll look in the end, and there are a variety of balloon creatures, ranging from classics such as balloon dogs to more SS13-y fare like fermids and rockworms.

Lastly, clowns can, of course, honk! You start with a bike horn that, when you click on it when in it's your active hand, produces a distinct, airy honk. Since you are (and should be) wearing a clown mask, clicking on yourself on Help intent also lets you honk the clown nose on the mask. Your PDA, too, has a unique program, the Honk Synthesizer, that can create honks on demand. Spread your honks like seasoning; honk to punctuate a joke or celebrate a successful prank.

A Brief History of Clowning

The Clown was previously a punishment position made to replace the Janitor; the incompetence mutation was there to make it a lot harder for them to do or use things that could be easily used for griefing. Like the Janitor, it turns out that giving griefers an entertainingly shitty job only encourages them, and it was made a regular job.

Admin opinion on a job that had open sanction to grief as hard as it could without breaking the other rules soured once they realized that for every entertaining Clown, there were 50 shitty Clowns that either plain sucked at being entertaining or actively broke the rules, thinking the job would make them immune to reprisal. So, the job was removed, but the outfit and job items were left scattered on the station for those who still believed in the true Honk Life.

The Clown was resurrected (with the old inherent issues doing things, and without the sanction to ignore the rules about griefing) with the introduction of the Job of the Day system, along with many other gimmick jobs. Eventually, it was deemed time to let the Clown have his limelight again.

Why are they here? Back in April 2020, Clown was restricted to a whitelist, similar to Head of Security, as part of that year's April Fool's gag. To get on the whitelist, you needed to make an application on the Clown Applications subforum. If your application got approved, the admins would award you with the "Unlike the director, I went to college" medal, and that would let you play Clown. Applications were a joke, and the admins approved pretty much everybody that applied, so the approval process was a joke too.

After that gag ran its course, Clown was reverted back to being playable by anyone. The applications still remain as a way for people to still get the "Unlike the director, I went to college" medal and its accompanying suite of clown college graduate regalia.

When you suffer the hardships of clowning, honk in certain situations, or slip someone with certain items, you earn XP. XP is specifically earned by the following actions:

XP has no effect on gameplay in of itself, e.g. it does not affect how fast you honk a horn or how loud they are. Rather they go towards certain job rewards, which you unlock through the Check Job Rewards command, accessible through the Commands tab. The rewards include:

There's a reason that spacemankind fears the humble, lowly Clown.

Clown traitors are almost the most emblematic part of Space Station 13: not only is there a dedicated staff position for some greasepaint-wearing, helium-huffing goofus, it turns out that sometimes they're out for your blood(sometimes literally). The Clown's own incompetence can get in the way of their own traitorous schemes, and many a Clown traitor has been brought low by their own hands/squeaky feet. However, proper Clowns know what exactly has a risk associated with it, and plan accordingly.

Clowns who take off their outfit as a sort of meta-disguise are the most dishonorable of all traitors, but there's no denying the practice can work wonders and catch even veterans off-guard. Still, there's no beating the style points from doing all your evil deeds wearing the most garish outfit on the station.

As an alternative to all the whole murder and terrorism thing, a Clown traitor can just use their traitor items for normal Clown business, like disguising themselves as a banana peel with the Chameleon Projector, popping out of a floor closet to pie someone, pulling a derringer out of places a derringer shouldn't be able to hide...your own creativity's the limit! Just don't be surprised if you get thrown in the gibber by critics. 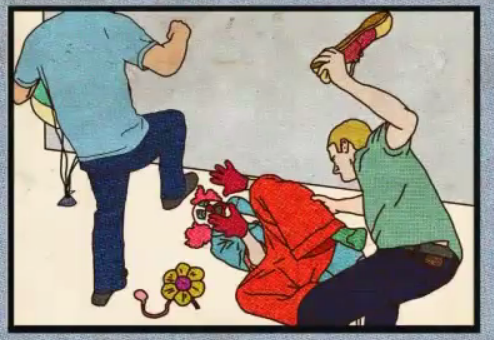