The Flockmind is a strange entity. The collective intelligence computed by a number of weak but numerous flockdrones, it exists as some kind of freaky alien radio ghost, stuck around this station in a state too weak to continue travelling across the vast expanse of space. Unlike other freaky alien ghosts, it lives or dies on the lives of its drones, who, controlled by NPC AI, will happily wander around and endanger themselves. At least a Blob Overmind does not need to worry about its nuclei wandering away.

The main goal of the Flockmind is to create drones to both preserve itself and create compute, a resource used to partition their consciousness and realize more complex structures. These drones are also used to convert the station into infrastructure to allow it to construct a signal relay broadcaster that will allow it to broadcast itself and continue its strange mystery journey.

Congratulations! You're in charge of the operation here, so may the creators have mercy on your digital soul. As the manifestation of the collective will of your vague distributed existence, all others within the flock must follow your command as holy writ. All others within the flock were ultimately forked from you, and if their values and actions drift from your intent, you can with a thought dismiss their independence.

As a radio gestalt, some of your abilities require that your target has some form of radio capacity, whether that means being a radio broadcaster or having some form of radio device on their ears, or in their pockets, or even in their backpack. If they don't, you are incapable of touching them with any abilities that work on radio signals.

Opened by clicking the

icon (no the other one, don't you love reused sprites?), this gives an overview of all drones, traces, structures and enemies of the flock. 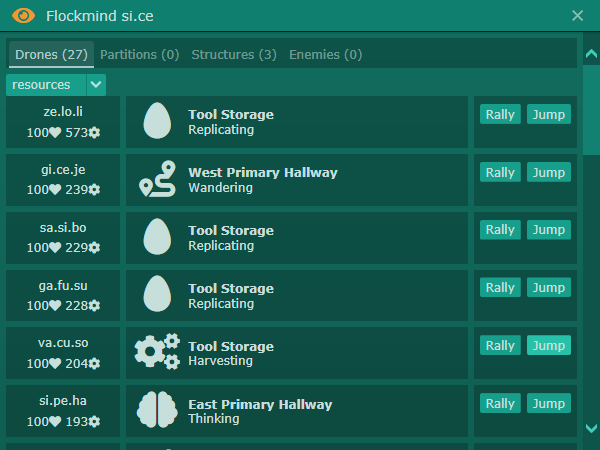 This is the place to go if you want to find that one drone that wandered off, count how many turrets you have, quickly jump to any aspect of the flock, or remove the sentience of a... malfunctioning trace partition.

Congratulations to you as well! You've been created to serve the flockmind in its mysterious aims of conversion and construction. You are only able to use the designate enemy and ping abilities, as your primary role is to be a flockdrone pilot hopping in and out of flockdrones as you desire.

The backbone of the flock and its primary physical manifestation, the flockdrone is a mobile platform designed to process the flockmind as a distributed computing unit and as a construction unit, capable of salvaging anything and converting it into useful smartmatter resources. The functions of the flockdrone are few but very specialised, and identical across all flockdrones.

How do I make them do things?

You have three primary ways of overriding a flockdrone's AI to make it do something:

When not directly controlled by the flockmind or a flocktrace partition, the flockdrones are controlled by much simpler algorithms that take up far less of their processing capacity to compute, which also allows them to contribute more computational resources to the flockmind. They have a hardwired set of tasks that they're able to do, and will always attempt to perform the task with the highest priority if a suitable target is available and enough resources are held. If there are no tasks to perform, and the drone is unable to find more things to do, it will enter a hibernation state. In the hibernation state, it will provide 5 extra compute, and stop performing tasks. A drone can be woken from a hibernation state by being given an order, being attacked, or seeing an enemy nearby.

Understanding how these minimally intelligent flockdrones act can be a key to both using them effectively and countering them as a regular crew member.

Specialized construction units with even simpler programming than the AI-controlled flockdrones, flockbits convert surrounding objects into flocktiles and other flockfurniture as quickly as possible, oblivious to and unable to convert or fight any other lifeforms that inhabit the space.

The relay is the ultimate goal of the Flock, a powerful signal relay broadcast amplifier capable of transmitting The Signal out to continue the Flock's propagation out across the universe.

The relay requires 1000 TOTAL compute to be unlocked (including compute used by traces, structures etc.) and 1000 resources to construct. Once built it will begin charging over the course of 6 minutes, rapidly converting the station around it and sending out loud pulses of sound, revealing its location to all crew. Upon reaching full charge it will Unleash The Signal, destroying a large part of the station in the process, utterly bricking all headsets in range and triggering an automatic unrecallable 3 minute shuttle call.

As the flock, you live and die on your drones. Left to their own devices, the drones will produce more drones, but the real secret to survival is to stun and to cage humans. Spread, assimilate, and rely on ever increasing numbers to become a menace to the station. Just be very very careful early game.

The flock is a foe that is trivially easy to crush in its early stages, but one of the problems that, left alone, will quickly become untenable to oppose. If you're opposing the flock, treat it like a blob or kudzu. Just because the drones seem harmless and uninterested now doesn't mean they won't suddenly charge you in far greater numbers than you'd have expected.