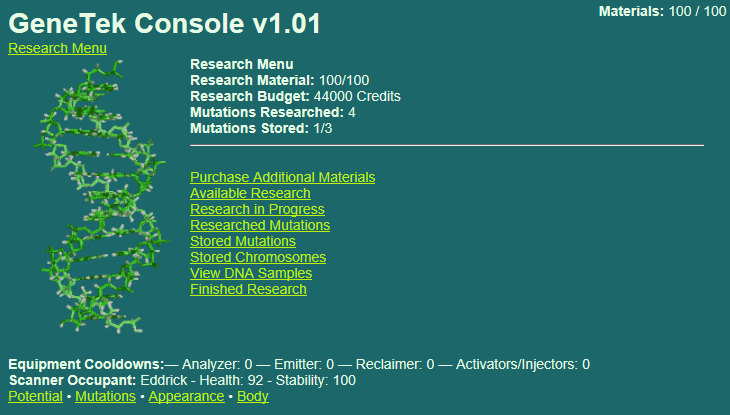 Geneticists have access to GeneTek consoles and scanners. These devices can, with enough patience, reward you with superpowers, crippling disabilities, or just amusing Mutations.

When you click Research Menu the GeneTek console will show:

After the GeneTek console is upgraded through Research it will show:

All cooldowns are measured in seconds.

To insert an occupant:

To eject an occupant:

There is a finite amount of air in the GeneTek scanner, so it is possible but unlikely for occupants to suffocate.

Research Materials are a currency shared by all GeneTek consoles.

You spend Research Materials on:

Every organism has Potential, Unknown Mutations, incomplete and inactive. Potential Mutations are randomized each round, but within a round, they will always be the same, even after death. Only changing identity via stable mutagen or DNA Scrambler can change it. The overarching goal of genetics is to research and activate Potential Mutations among the crew.

To activate the Mutation either:

When you activate the Potential Mutation of a crew member or player-controlled monkey you are rewarded with:

Activating a Mutation on an NPC human or monkey will not give you the above rewards, though the Mutation will still work as normal.

You can Create Activators from menus:

). Click on the GeneTek console with the filled DNA Activator in your active hand to put it in and receive the rewards. If the DNA Activator did not activate a crew member's Potential Mutation, you'll get a useless expended DNA Activator (

Mutations are composed of base pairs. Bases are represented as letters G, A, C or T (Guanine, Adenine, Cytosine or Thymine). Bases always come in pair. G is always paired with C and base T is always paired up with base A.

You can only Sequence Mutations of GeneTek scanner occupants.

Mutation with an unknown Sequence.
First, insert an occupant into the GeneTek scanner. Then, select a Mutation you want to Sequence. You don't have to research the Mutation before Sequencing it.

If you do not have the Gene Sequence Checker Research, you can make the guesses manually by going through all the sixteen base pair permutations. If you have one person with half of the code for the Mutation and another has the other half, you can compare the two and deduce the complete code, or at least part of it.

Correct guess, but a base pair is locked.

After correctly guessing base pairs it is time to unlock the locked base pair.

Notice a little lock? Click on it to begin a game:

If you don't want to play the game, you can type "unlock" and auto-decrypt the lock. You gain 2 auto-decryptors after activating a Mutation on a crew member.

Alternately, a specific chain of letters must be entered to unlock the pair of bases. The only possible combinations here are GG, GC, CG and CC.

If your answer is wrong, the machine will show you how close you are to the correct answer. Let's assume we entered GG and this was the result:

This shows that there is no G in the code, and thus the code must be CC!

Some codes will be this simple, but others will have up to 4 characters. Some genes will even have multiple locked pairs. Most of the more powerful genes have some of their pairs locked, so it can be worth the effort!

Completing the DNA Injectors research allows the creation of DNA Injectors . When you inject an organism with a DNA Injector they will gain the Mutation even if it was not in their Potential Mutations. However, these do not give any Chromosomes, Research Materials, or auto-decryptors as rewards. It is also important to note DNA Injectors change the organism's Stability!

To make an Injector, pick Create Injector from either Stored Mutations or occupant's Mutations. This can be done every 40 seconds for 40 Research Materials. They share a cooldown timer with Activators, so creating a Injector also prevents you from making an Activator and vice versa.

DNA Injectors are administered similarly to DNA Activators, i.e. you click on the subject while you're holding the Injector to use it on them (The subject can also use it on themselves.) Using one always creates a "filled injector"; these do not give any rewards when redeemed, and it is not possible to make them do so.

When you access an occupant's Mutations or Stored Mutations and click on a Mutation, you can choose Sell at Gene Booth to send 5 applications of the Mutation to the Gene Booth for 30 Research Materials. It'll prompt you to set a price in credits and a description. It is possible to sell Mutations spliced with Chromosomes, but it is not possible to remove Mutations from the Gene Booth, so choose carefully.

Similar to Injectors, the Gene Booth can give Mutations not in the recipient's Potential. Receiving a Mutation through the Gene Booth changes their Stability. Because of this, it is common practice to splice Mutations with Stabilizer Chromosomes to nullify the Stability change.

Gene Booth sales go towards the Research budget. You can swipe your ID card on the GeneTek console to siphon a portion of the proceeds to your own account.

When you activate a Potential Mutation it becomes an active Mutation. There are a wide variety of Mutations, some commonplace and simple, some extremely powerful and rare. Some are beneficial, some are detrimental, some are situational, and some are just wacky and fun. There are more mutations than those listed here, so feel free to sequence and find Mutations on your own!

When you die you lose all your Mutations, but keep your Potential Mutations. For the cloner in particular, you can also enable the Advanced Genetic Analysis option, so clones keep Mutations they had when they were scanned; this is especially handy for those trying to stick with a certain Body Type Mutation.

Clicking the blue ABIL tab on your hotbar will toggle between standard options and your available Mutation powers.

Mutations are different from Traits.

Debilitating Mutations often increase Stability while beneficial Mutations decrease it. Gaining a Mutation that was already in your Potential causes no Stability loss or gain, e.g. getting Mutations through the Gene Booth and DNA Injectors can change Stability, while getting them via DNA Activators does not.

Low Stability causes your Mutation powers to backfire or even degrade into their opposite Mutations. For example, Toxic Resistance degrades into Blood Toxification, while Optic Energizer burns your eyes instead of firing lasers. Having Stability below 50 also garbles your speech, replacing some letters with g's, u's, l's, and b's, and instead of "[name] says [text]", it's "[name] gurgles [text]".

Body Type Mutations cosmetic Mutations that change your Body, Appearance or even Race. You can only have one active at a time. You can activate these through the Body menu or just like any other Mutation.

Even if you are not a Human, you are still protected by the Rules.

Booster Genes are a group of mysterious Mutations that, on their own, do absolutely nothing. However, they interact with other Mutations in various and interesting ways.

This is a rare mutation which cannot be researched or activated using a DNA Activator, it can also only be Sequenced which means the occupant must be in the GeneTek scanner. When activated and stored in Mutation Storage, it serves as a wildcard for combining Stored Mutations, so you can very easily get some fascinating and rare Mutations this way. When activated it unlocks powerful Research.

Chromosomes are Mutation modifiers. They can be be spliced with Mutations. Each mutation can only be spliced once. Each time you activate a Mutation you gain 2-5 random Chromosomes. Each GeneTek console has its own Chromosome storage.

There are different types of Chromosomes:

You can buy extra features and upgrades through Available Research. Research is shared between all GeneTek consoles.

In return for slowing down the cloning process with Advanced Genetic Analysis enabled on the cloner all Research cooldowns are reduced by 5%. Up to two active cloners will reduce the cooldown.

Once you have researched Mutation Storage, active Mutations can be stored and combined to yield new and more useful Mutations. Some of these are only available via combination, whereas others may appear (rarely) as 'Potential Mutations. There isn't any penalty to getting an invalid combo, so feel free to experiment and see what results you get!

Alongside Potential, these menus appear when you have someone in the scanner. Compared to Research and Potential, there's not much to say about these. They still have a purpose, mind you, but they do far less than the other ones. and are way less important.

This lets you change the occupant into a variety of lovely forms depending on what mutations you've researched, such as a lizardman or a giant cockroach. By default, Human and Primal Genetics (monkey) are available.

This one opens up a menu just like the one in the Character Selection screen, where you can change the hair style (s), hair color, skin tone, eye color, and various other cosmetic things about the occupant. If you want to give people obnoxious Sailor Moon hair or colorful Rainbow Afros, this is the place (and the only place at that, as this is pretty much the only way to get those unique hair styles). Only appears if whoever's in the scanner is a race that can accept these appearance options, namely humans.