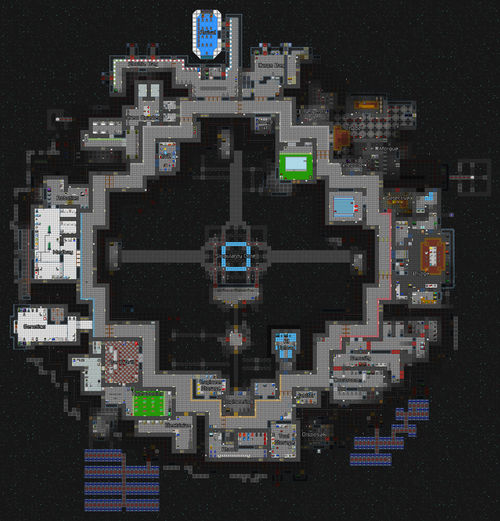 Donut Station 2 was the primary station used by Goonstation servers after Devstation and before Mushroom Station. It was reintroduced as a selection for the Map-Vote poll on Goonstation #2 (formerly known as LLJK US2) in November 2017.

Unfortunately for it, the donut had simply grown too old and moldy for contemporary SS13 tastes. It lacked many of the necessities and conveniences better, more modern stations took for granted, like multiple NanoMeds, accessible supplies of tools and tanks, and plain ol' general polish. Less than a year later, after much player antipathy, and with no real niche beyond novelty or nostalgia, it was revoked from Map-Vote, with a very much pending revamp/rework.

Note: On this map, the Research Department has its own mini-station, Research Station Zeta, accessible via the shuttle console on the westmost end of the Shuttle Bay.

Donut Station 2 was the first station to:

At the same time, Donut Station 2 was also the last station to: