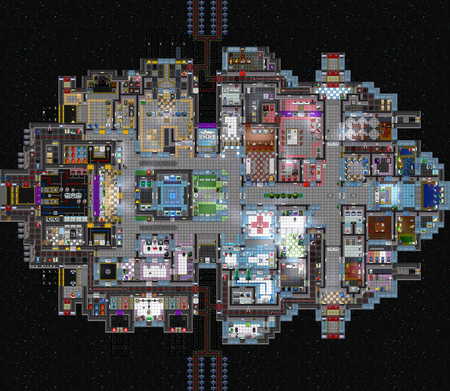 What avail are forty freedoms without a blank spot on the map?

— A plaque on the Bridge of the NCS Atlas, quoting a passage from Aldo Leopold's A Sand County Almanac.

Intended for low population rounds, the ant-sized Atlas is a cartography-themed vessel that's currently the smallest ship/station in rotation. Its designer, Goonstation admin and spriter Gannets, created it as a tiny but still complete map with a short compile time, so coders could quickly develop and test new features without having to wait the map to compile, back before Lummox's fixes significantly cut down compiling time. Since the fixes, it was left abandoned for many months and did not receive much attention until 2017, when an in-progress version was released, and 2019, when it was dusted off, somewhat revamped, and released to the public map rotation.

Unlike with real atlases, any errors/bugs you discover or any missing items are actual mistakes. You should report them with the in-game bug-reporter button in the top right of the game screen or at the bug tracker on the Github.

Note: This map only appears in the Map Vote if the server's player count is below 30.

Note 2: The Mining Shuttle on the Mining Outpost will not take you to the station on this map. You'll still get the usual messages, but you won't go anywhere.

Atlas was the first map to:

Directions on this page (though not necessarily other ones) reflect directions used by the map, which considers the direction the Bridge is facing to be northwards, somewhat similar to nautical directions. That means, while the ship is horizontally-orientated, north in this case is what we might call the right part of Atlas, while south would be the left part. West is upward, and east is downward.