The teleporter lab, not to be confused with the Teleporter Room, is where scientists go to conduct telescience. This involves plotting coordinates into a computer in order to send or receive items through the teleporter pad. With practice, you can pick up items from a specific tile anywhere on the station and even deep space.

Note that abusing the teleporter to steal everything that's not nailed down when you're not the traitor will land you in a world of trouble. 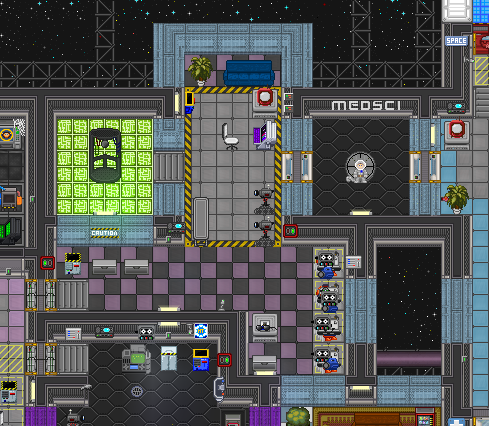 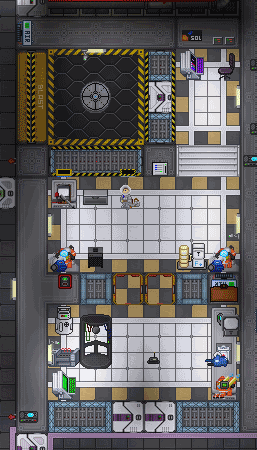 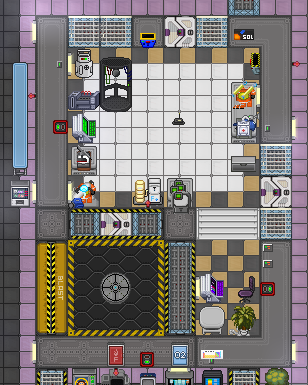 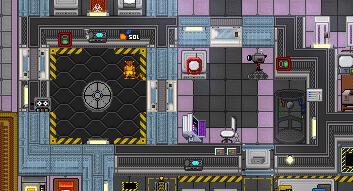 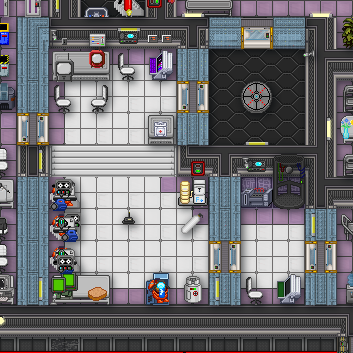 The Science Teleporter on Kondaru

A word of warning

Before we get into the actual mechanics, there are a few things you should know. Firstly, using the teleporter successfully requires a decent grasp of line geometry and two-step equations. Secondly, randomly plotting in coordinates may trigger anything from violent bursts of flame and paralyzing explosions to monster invasions. This is why you should always scan before sending or receiving, and if all else fails, keep a fire extinguisher at hand and consider lowering the blast doors to the teleportation pad.

Send: This will send one object on the teleporter pad to the selected destination. Multiple objects will require multiple presses of the Send button.

Receive: Same deal as Send, but brings things from the destination to the teleporter pad instead.

Toggle Portal: Spawns a portal on both the pad and the destination, allowing people to freely move between areas. Also warps everything that was on the tile when the portal was formed. This will rapidly deplete the APC's power, so try not to keep portals open for more than a few seconds.

Scan: Scan the area to see if its destination is valid, and if so, what kind of atmosphere it has (if any at all).

Bookmark: Saves the current set of coordinates to the console, letting you bring it back up with a touch.

This occurs because the coordinate plane the science teleporter uses is offset from the "real" plane so the coordinates of the place the teleporter will take you will differ from the coordinates in the computer. To recalibrate the teleporter, you'll need to find out how exactly offset the science teleporter is and adjust whatever X, Y, and Z values you put into the computer to account for these offsets. The differences/offsets of X and Y are modeled by the equation "t=mb+c", where B is what you put in, T is what it results in, and M and C are constants you have to solve for. Z is offset differently, but simply using Scan will allow you find the valid Z values.

Note that the computer alters X and Y coordinates separately, so their functions will be different! The exact math formula (but not the general form) changes every round, and is different for every computer (so if telescience gets bombed, you'll have to do the algebra again).

X and Y are like the familiar X and Y of the coordinate plane, with the origin being the very southwest corner of the map, while the Z coordinate identifies the map. The Z coordinates change every round, but the station Z-level is always one below the one for the Adventure Zone, which in turn is always one below the Debris Field level and three below the Mining Level. Two ways to confirm for sure which one is which is to either use coordinates of known landmarks, or send a GPS through to valid coordinates, and check its location with another GPS.

The basic thought of the procedure is to grab a couple GPS units from around the Telescience lab (they might be hidden in a crate or on a table with bunch of other crap) and start solving systems of equations.

Using this new data, you can then solve for the 'c' factor in both equations. The math is simple enough to be put into a spreadsheet, so if you find yourself annoyed at the time this takes, make your computer do it for you!

This is a concrete example of decoding the teleporter.

Solve for 'c' factors:
Be extra careful with where you plug things in here.
X equation:

Or, rearranged to how you'd actually use it (since you know the X and Y you want):
X equation:

Putting It All Together

So you've managed to find the teleporter offsets. Well done! So how do you use them? Well, if you haven't figured it out, you plug in the coordinates of the place you want to go to or receive from for X and Y, and the resulting Mx and My are what you put into the teleporter computer for X and Y, respectively. So, if you wanted go to say, (131,212), you'd do something like this:

Or, with the rearranged equations:

Do I really have to do all of this math?

Nope! Online telescience calculators exist, and often even give you maps of the station to easily find coordinates (although they may not always be 100% accurate)!

The quantum telescope is yet another fancy device at your disposal! It provides coordinates to the Experimental long-range teleporter. Its mechanics are very simple. Imagine Marco Polo, but instead of sound volume, it's circle size and circle overlap.

That's if it's an actual place you can teleport into though. If it's an asteroid, it goes to the mineral magnet controller, where the Miners can pull it into the station's mineral magnet via the Activate telescope location option. That's why a second telescope/the only telescope is securely located in the Mining Department: because it's so darn cool.

Congratulations, you are a traitor scientist and the world is literally at your fingertips. As if bomb making and other science mischief wasn't enough, the potential uses for the teleporter are many. Remote theft, remote arson, remote bombing, remote kidnapping? There's remotely nothing you can't do. Just keep in mind that "bases" that belong to other antagonist roles (such as the Space Wizard and Syndicate shuttles) are hidden away on z-levels, completely impenetrable by any means and will simply fizzle the teleporter's feeble attempts to teleport in there.