What is Space Station 13?

Space Station 13, or SS13, is a multiplayer sandbox roleplaying game built on a niche platform called Build Your Own Net Dream, or BYOND. SS13 h to classify, but it is often compared to Dwarf Fortress for its immense complexity.

There are many different versions of SS13, each with drastically different mechanics, settings, controls, and interfaces, so they're more like completely different games rather than mods of a "vanilla" version. The one you're reading about is Goonstation.

Oh, and SS13 in general and Goonstation in particular are free, and always will be. It's "free" as in "free beer, pay for beer with cool label", not "free" as in "free to play, pay to skip agonizing wait" or "free to play, pay to be competitively viable". You don't have to pay Goonstation, and donating to Goonstation through Patreon just gives you a cute bee pic, a custom Discord role color, and potentially a figure of your character or a custom plushie depending on how much you paid. You don't have to pay BYOND either, unless you want a premium membership to cut down the delay when you join a server, not see ads when connecting, and have a custom avatar.

Summary: Make sure you're on Windows and your Internet Explorer/Microsoft Edge and graphics drivers are up to date. Download The BYOND client and register a BYOND account.

Aside from that, there aren't any hardware requirements. For clients, there's no minimum CPU bus speed, ram size, etc.

Summary: Read the General Game Rules. If you're on the Roleplay server, read the RP Rules too.

Before you connect, we at the Goonstation community would like you to read our Rules! Our rules are different from most other servers' and communities', so please take the time go through them. You should at least go through the General Game Rules. You don't have to read the Roleplay Server ones if you're not planning on playing on the Roleplay server.

You should really read the Rules page yourself, but let's go over the most important rules.

Fortunately, the Goonstation administration team usually tends to be lenient. When handling a new person like you breaking the rules, an admin will usually try to talk to you through AdminPMs. Be honest, respectful, and willing to take responsibility for your deeds and change, and things'll go well. You won't get banned just for your first offense; bans are only used if you're a repeat offender or if you log off before the Admins can talk to you, in which case you can go to the forums to explain yourself and show repentance.

If you have any questions about the rules while you're in-game, press F1 to fill out an Adminhelp, a request to the Adminstrators who run Goonstation and manage its players.

Connecting to a Server

Which Server Do I Connect to?

Summary: Once you've connected, configure your setting through Character Setup and set you job preferences. When you're done, press Declare Ready to join the game. 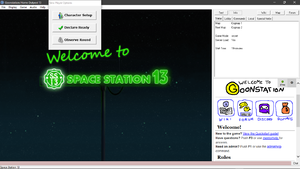 Once you've successfully connected to a server, you'll see something like the following image on the right, give or take a few minor popups that can be safely ignored. Let's focus on the New Player Options, which has the most important buttons right now for a new player:

Clicking on Character Setup will open up a huge window with five boxes for character profiles, a list of empty (for now) "cloud saves", and loads of options. Each one is relatively self-explanatory and has a little icon that, when you hover over it, explains what it controls. Let's go over some important ones worth discussing:

Which Job Should I Join As?/How Should I Set My Job Preferences?

Summary: Prioritize Janitor, Botanist, Chef, and Barman, which are relatively easy to learn, low-stress, and fairly engaging. Go Staff Assistant if you want to get a better grasp of controls or slots for the aforementioned jobs are full. Avoid Security Officer, Detective, AI, and Cyborg for now.

Space Station 13 is a pretty in-depth game, and it can be overwhelming at first, which is not helped at times by its somewhat archaic interface and controls that seems to take cues from at least two genres. The first few hours of SS13 where you're just trying to get into the swing of things are already stressful enough, so with that in mind, we recommend these following jobs for beginners, which are all relatively easy to pick up, possess a fair amount of things to do without being too stressful, and have relatively low consequences for messing up:

We recommend against these jobs:

You might notice a low O2 warning pop up in your HUD, indicating you're currently lacking oxygen. Sometimes, this is because some of disease or poison preventing you from breathing, but more often, it's because some part of the area you're in has been exposed to space/the ocean and has lost air. In these situations, to breathe, you must have what are called internals, which consist of:

Just having this won't keep from suffocating. To configure your internals to start supplying air to you: