Difference between revisions of "Adventure Zone"

Space Station 13 is a scary place. Traitors and the Syndicate try to derail operations on a regular basis, various horrific entities are drawn to it like moths to a flame, and sometimes there are disasters that just defy all logic and sense. Have you ever wondered what life would be like off of the station?

Well, as it turns out, things aren't better off of this space-faring metal nuthouse. In fact, they're much, much worse. Welcome to Hell.

What is the Adventure Zone?

The Adventure Zone is a Z-level with special areas that can only be accessed through Telescience. It's where the game sheds its "wide open sandbox" masquerade and becomes straight-up survival horror. Tombs devoid of sentient life are the norm, replaced mostly by numerous, violent monsters (called "Critters" according to the game) that comprehend nothing other than ending you as quickly and relentlessly as possible. The environments themselves aren't any more merciful, containing many a deathtrap waiting to claim the lives of any foolish explorers who wander into them.

Accessing the Adventure Zone isn't hard; all you need is an understanding of Telescience's algebra. Most of the Zone will produce interference unless you target the exact spot to teleport to; this is indicated by a GPS left on-site. All of the GPS coordinates throughout every Z-level are displayed in your GPS, so all you need to do is figure out which GPS corresponds to which area, translate the coordinates, and teleport in. However, finding an adventure area isn't the issue. Survival is.

The first area you should probably tackle to ease you into the Adventure Zone mindset. the Mars Outpost is more like a tutorial than anything, showing you that you must do things outside of the norm to proceed. Short and simple; just mind the environment!

A museum about the history of the moon and how plasma is tied to it. A learning experience for all ages!

Cats, cats everywhere! A fairly nice place to relax in (besides the hairballs, of course). I wonder what's behind those sealed doors?

This is where your experience with the Adventure Zone truly begins, with an insanely hot climate and flesh-searing lava; and a nice balance of lore and puzzles.

Easily the largest area in the Adventure Zone, the Biodome features two different paths for you to follow- each with its own atmosphere and dangers. Will you explore the abandoned facility and surface, or go spelunking in the caves?

A fairly normal-looking location, but damn! What's that awful smell?

An intriguing and confusing space between dimensions where nothing makes sense, accessed through a dimensional fissure that has a chance of appearing with each use of the Telepad's portal function. The Void is a maze of different structures with a relatively linear path to the exit. Try going off the beaten path for some fancy rewards!

An abandoned asylum filled with spooky things. One of these spooky things is extremely dangerous and likes to hang around specific areas of the asylum, so watch your step.

This area, commonly referred to as the Ice Moon, is one of the most unforgiving areas in the Adventure Zone. Monster volume is very high here, compounded by the freezing cold temperatures, an atmosphere made entirely of CO2, slippery ice and a long and winding road to the end. Inexperienced explorers need not apply- only the hardiest of adventurers have a chance of making it through here.

A small ship orbiting the Sun that contains many secrets. A couple of things rest here, but the main attraction is the Automaton, who serves as a depository for keys. These keys are well-hidden across the world of Space Station 13, and typically take the cooperation of multiple people to find. Don't expect to be gunning for them without a lot of help and knowledge.
FUN FACT: The name of the mystery of Goonstation lore has been called the "Solarium" because of this place's integral part in finding the Bad Ending.

Hazards: None
Puzzle Difficulty: None

Hazards: None
Puzzle Difficulty: None

Accessible exclusively through the Experimental Long-Range Teleporter. A calming Japanese area containing a fair amount of things- even a functioning forge!

Accessible exclusively by John's Bus, a shuttle that stops at the Sea Diner on the ocean-based maps and the Space Diner and Mining Outpost on the space maps. A decrepit owl-themed nature park with a surprisingly safe and functional gift shop. The actual owlery and maintenance areas behind the security cordons, however...

The remains of a transport ship that crashed into a deep abyss in the Trench and was at some point attacked by the Syndicate...and perhaps something far worse. What's with those corpses? What's in that cargo hold?

Hazards: None
Puzzle Difficulty: Yet to Be Solved

Currently only reachable if its entrance is spawned by Admins. A high-security repository built into the lower levels of the NSS Manta, as mysterious as it is massive. What are sort of secrets are locked behind those hulking bulkheads? And more importantly, how do you open them?

Why should I go adventuring?

Okay, I know what you're thinking. "All of these places are so dangerous and horrifying! Why would I ever want to go there!?" Well, there are two reasons: loot, and lore. By progressing through the Adventure Zones you can find all sorts of loot in the form of medals (give you cosmetic rewards), Syndicate gear, and strange items/artifacts that you can get no where else. When going through the Adventure Zones, you can also start uncovering the lore of the world around you. Why do these zones exist? What happened in Meat Station, Outpost Theta, and all the all other Adventure Zones? You can uncover these mysteries and many more by exploring the Adventure Zones.

Between the climates, Critters and traps, there are an obscene number of ways you can die miserably on these Telescience expeditions. You can't make it through these horrible places by just waltzing in, preparation is paramount.

So you're an antagonist who got forced into a telescience party, or hopped in willingly following an assassination target, or you unwittingly made it there trying to escape from Security. The point is: you're along for the ride. Fret not, however, for being an enemy of the crew in these cases is a blessing in disguise! Rude though it is, it is criminally easy to get away with murdering the whole expedition team, and there are three very good reasons to do this.

Reason number one: Privacy. Out of fear for their own lives or fear for messing things up, you will hardly ever be interrupted by late arrivals to the Adventure Zone. This means you have a static amount of targets to deal with and thus a much easier time planning their demise. Strike quickly and quietly; if you're good about it, you can wipe out the whole team in one fell swoop before they can even shout out what's happening to the rest of the crew, and you'll never be suspected of foul play because death in the Adventure Zone is pretty much what everyone expects. You can even lead them into the area's deathtraps to avoid culpability altogether!

Reason number two: Power. Once you kill your colleagues, you'll have access to the items and weaponry they brought for themselves, which is really handy if they stocked up on things like shotguns and lasers. Bonus points if this includes the Port-A-Sci remote, as you can exit the Adventure Zone with your stuff and not even be spotted leaving! More bonus points if you stick a Pod in the Artlab's pod bay and have access to it (usually through an ID looted from the party), as you can steal the Port-A-Sci itself along with all the loot and bodies you stashed in it, load it into the Pod and flee without leaving anything behind.

Reason number three: Loot. Some of the "kick-ass items" mentioned earlier are in fact weapons and even traitor items, which means if you know where to look, it can save you some Traitor PDA credits. Some loot items are also helpful in ways other than killing people. If you have enough know-how and a little luck, you can easily return to the Station as a massive threat that no one sees coming.

Alternatively: If you're a traitor and actually want to help the telescience crew, then you have access to weapons that they do not and as such are a huge boon to the expedition. Traitor weapons can clean the clocks of most critters with ease, and healing items like Syndicate Donk Pockets and Stimpacks are always appreciated.

A chart of the plasma giant SS13 orbits and its other satellites, some of which may look familiar, that adorns Telescience and the Bridge. With enough investigation, you can piece it together yourself. Click for larger image. 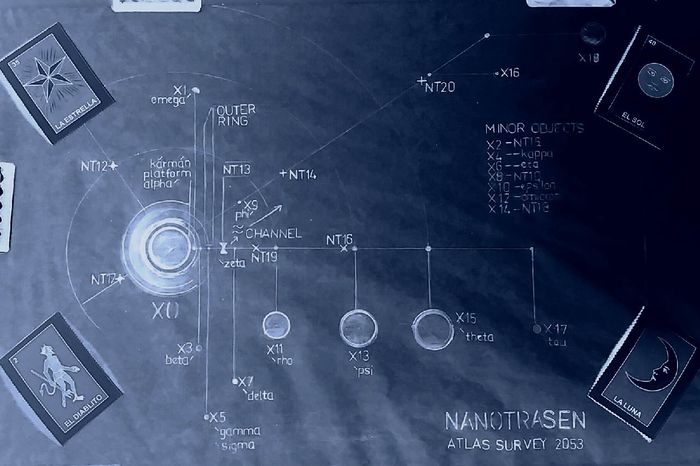