So, you want to learn how to code for SS13? Well you've come to the right place. This page is dedicated to helping you learn the ins and outs of writing SS13 code. I'll assume you have an above average knowledge of computers. If you ever need help with any of this, feel free to visit the #imcoder channel in the goonstation discord! There's a bunch of helpful people in there who would love to help you learn or help you with any errors you're getting <3

Setting Up Your Local Goonstation Branch

Currently (if you haven't touched any files since you cloned goonstation, and haven't messed with compiling or hosting) every single file in the goonstation directory is unmodified. As soon as you modify a file in any way, that file will become modified and lose its unmodified status. If you type git status (git status will show you all added, modified and untracked files in the branch you're working in, and the name of the branch you're working in), you'll see that file in a modified files category with the file path in red text. Now, if you type git add your/file/path/yourfilename, your file will become added, and it'll be added to the list of files that will be committed. I'll talk about committing a bit later. If you (or byond, in the case of the weird hosting and compiling files) creates a new file in your goonstation directory, it'll be added as an untracked file. Both untracked and modified files will persist between branches and commits. This is useful for some things, like editing config/admins.txt to include yourself as a host for testing purposes and then never adding the file so you'll always have an admin rank anytime you test... but it can also be problematic so make sure you're not leaving anything untracked or modified that should either be committed or reverted.

Branch Control: To list all of your branches, type git branch. If your list of branches is taller than your terminal window, use the arrow keys to navigate down the list. When you get to the bottom, press q to exit the weird no-typey mode so you can continue to do commands. If you want to switch to a different branch, type git checkout feature/new-stuff-v3. If you want to create a new branch, type git checkout -b feature/new-stuff-v4

Committing And You: You can save changes to files, but one of the advantages of using git is that it has REALLY good version control. Say you commit some changes on a patch that's making a new jumpsuit, right? In your first commit which you made yesterday, you made the basics of the new jumpsuit, giving it a name, description and a sprite. But- egads! When you open up dreammaker today, your code is gone! Well, you can fix that by reverting to your earlier commit, where everything will be restored to exactly how it was when you committed yesterday. In order to commit, you'll want some files to commit. Add files you want to commit like how its shown in the file statuses section. Then, just type git commit -m "your commit log message here!!" This will commit all the files you told it to commit, and save that in the commit log along with your message. (

Pushing Changes: Just type git push origin feature/handholding to push your local changes on your local branch to your online version of the branch that other people can see and interact with.

The open-source release of the code includes a guide to using Visual Studio to create your private fork and branches, manipulate them, and submit patches here:

Note that if you follow that guide, you will not need to use the later Submitting a Patch section, since that guide covers how to do so with Visual Studio. 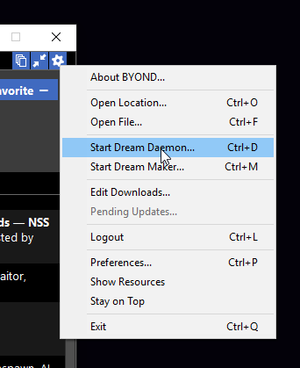 Now I'm going to show you how to edit, compile, and run code, using DreamMaker.

Introduction to DM as a language

DM is a high-level programming language, meaning, effectively, that its use does not require much understanding of computer hardware. Its purpose is the creation of games, and so tricky things like memory management are smoothed over for the coder's convenience. This is done by way of a process virtual machine: .DM source code is compiled not into machine language, but into a binary format designed specifically for BYOND. For a Dream Maker Binary (.DMB) to run it must be hosted by Dream Daemon, one of BYOND's four executables (Dream Seeker, the program used to play BYOND games, can also host them, but it is not recommended for Space Station 13).

BYOND, being patterned on C++, is an object-orient programming language. Abstract classes are defined in the code, which serve as templates for objects manipulated by functions. Suppose, for example, you are making a game with bears. You define all the variables and functions associated with them: What they're called, how they move, etc. This is the bear class. Whenever a bear comes into existence within the game, an object of this class is instantiated. Though its variables are derived from its class, changes made to them are made only to that specific bear; neither other bears nor the template itself are affected.

The concept of inheritance is central to object-oriented programming. One class can be derived from another, such that they share everything defined in the parent class. For instance, you might wish your game to feature a special type of bear. The path for a bear is /mob/bear (bear is itself a child of mob, a built-in class which will be discussed later). Therefore, you make a subclass /mob/bear/fuzzy_wuzzy. Any changes to /bear affect /bear/fuzzy_wuzzy, but not vice-versa. You can even define subtypes of inherited functions, a practice known as overloading. Suppose /bear has a function called sylvan_defecation, rendered in DM as /mob/bear/proc/sylvan_defecation(). However, you want bears of the /fuzzy_wuzzy variety to behave differently when answering nature's call, and so you overload that function by defining /mob/bear/fuzzy_wuzzy/sylvan_defecation() (note the absence of /proc/). Whenever a function calls sylvan_defecation() on a bear that belongs to the /fuzzy_wuzzy/ subclass, it will execute its special version of that function.

DM, as we discussed above, is executed by way of a process virtual machine. This means that, though it shares much of C++'s syntax and logic, it is ultimately a lot simpler. As such, it is not overly concerned with rigid type-management. A variable might represent a number one moment and a string the next. Such a transformation can still cause all manner of errors, if the coder does not account for it, but it won't necessarily cause the game to crash. In most cases Dream Daemon will simply shrug, inform you of your blunder, and carry on to the best of its abilities. This sort of extreme looseness is of dubious efficacy, but it means that you won't need to fret about the number of bytes allocated to a given value, whether a number can be negative, and other such distracting things.

As mentioned above, BYOND has certain built in classes. The first of these is /datum. This is simply the ancestral class, from which all others are derived; note that a class defined with no explicit parent is considered a child of /datum. From /datum comes /atom, the fundamental class for things in the game world. Simply put, if a thing is on the map, it derives from /atom. This brings us to the four elemental classes: /turf, /area, /mob, and /obj. Note that /turf and /area are derived directly from atom, whereas /mob and /obj are derived from /atom/movable. Only objects derived from the elemental classes can exist on the map; this contrivance means there is no point in defining direct descendants of /atom and /atom/movable.

The /obj class is something of a catchall for movable objects. You might derive from it classes for machines, items, or even creatures. Anything player-controllable, however, must belong to /mob, intended exclusively for creatures. Both objs and mobs within the map are contained by objects of the class /turf/. A turf is simply a tile on the map. Being as it is a point on a grid, a turf cannot move. Turfs, in turn, are contained by objects of the class /area. Areas are meant for use as zones or rooms. In the same way that multiple items can be contained within a single map tile, multiple map tiles can be contained within a single area. You might, for example, wish for a certain sound to play when a player is in a given room, or for certain creatures to be barred from certain places, or goodness knows what else. The possibilities are myriad.

It should be noted that there exist built-in classes not mentioned here, such as /client or /image, but they are not relevant at present.

In summary, the line of descent is as follows:

Code Stuff You Should Know

If you used any method besides the Visual Studio method above, you will need to make a pull request on github once you have finished making your patch. A quick concept review: the Fork is the entire family of your modifications. Your fork should have a branch for each patch you make.

Navigate to the github page for your branch. If, for example, your github username is pooby, your fork would have the link https://github.com/pooby/goonstation

If you have a branch named punp, your branch would have the link https://github.com/pooby/goonstation/tree/punp

You'll want to navigate to your branch and hit the "New pull request" button. Make sure the base goonstation/goonstation branch is on the left side and the branch you want to submit as a patch is on the right side. You'll be given a chance to review which files would be changed. Once you're satisfied, create the pull request. At that point, the submission process has begun; coders review pull requests that have been made and choose to accept or deny the request.

Goonstation formerly stood at a weird intersection of open- and closed-source. Most of the code is closed-source, kept away from the public; however, some coders may share some code with you, particularly if you want to make a patch. In addition, there have been two public releases of the source code: one from March 2016 and one from 2020, which contains the source as it was on January 1st, 2020, with certain secrets and other things plucked out. Pretty much all the patches made at the time used code from these repositories. So, if closed source is a walled garden, Goonstation was a walled garden that occasionally let people in to study the gardening techniques and landscape patterns used, and sometimes, it released books and treatises explaining how the garden is constructed.

As of April 1st, 2020, the goonstation administration made the decision to make the code open-source; for the interested, a statement from the admins exists at this link. The new open source is found here. Some elements are still kept secret, particularly content designed to be secret so it can't just be instantly looked up and figured out; but the vast majority of the code is now maintained there.

Goonstation is specifically licensed under the Creative Commons Attribution-NonCommercial-ShareAlike 3.0 United States License, or just CC BY-NC-SA 3.0 US. It's best explained on its dedicated page on the Creative Commons website, but it essentially means people like you can contribute code to Goonstation, using code from the public releases, open source release, and/or snippets of code shared by people on the Goonstation coder team, and the only lawyers you'll have to worry about are ones in-game.