Difference between revisions of "Vampire"

Do you suddenly find yourself vanting to zuck ze crew's blaad? Maybe you're a Vampire. Bleh!

In addition to regular objectives, vampires also have to acquire a certain amount of blood. This depends on the quantity the vampire has acquired in total, ignoring how much it has spend on spells throughout the entire round.

Vampires tie in with the blood mechanics. Doctoring may contain useful information for you.

First and foremost, vampires thrive on drinking blood. While you go the entire round without drinking a single drop of blood, you won't unlock any of the more interesting and/or useful powers. You gain blood by:

While you can ingest blood extracted from a monkey, you can only drain blood from humans or monkeys turned into humans, living or dead. It should also be noted that draining blood from the Chaplain through the first three methods is an extremely bad idea. The blood of a holy man will not only burn you quite badly, but also destroy some of the blood you already have! However, similar to monkey blood, extracting the Chaplain's blood (i.e. with a syringe or by stabbing them) has no ill effect aside from being inefficient.

Vampires gain a number of different abilities and spells as they accumulate more blood. Once unlocked, the vampire keeps the power for the rest of their unlife, even if their blood level dips under the point they unlocked it at. If they die, they lose all their blood and need to unlock their abilities again. None of these abilities can be used while unconscious, nor can they be cast while standing in the Chapel.

While you can sleep in a bed like a mortal, it's much better to sleep in a coffin. Whenever you're in any coffin, whether it's the special one created by Coffin Escape, the regular ones in/near the Chapel, or the renamed one used for the Morgue Supplies crate, you regenerate your limbs and heal all damage extremely quickly. We're talking from critical condition to full health in under a minute, at most. If you somehow die/are dead, being in a coffin will even revive you! However, you still start your new unlife without any blood and will only have your starting powers (i.e. Bite, Blood Steal, Glare, Hypnotize, Cancel stuns & Blood tracking) until you drink enough blood for new ones.

Thanks to spooky undead shenanigans, you are immune to many of the ailments those human bloodbags suffer. You cannot be infected by Viruses or the pathogens created by Pathogen Research. You cannot enter shock, cardiac failure, or similar heart problems. Similarly, you cannot develop hypertension, hypotension, or clotting, and though you do spray blood when stabbed, you do not actually lose blood.

In addition, upgraded health scanners always indicate you have 500 units of blood, regardless of how much blood you've actually gained or currently have. If your Blood remaining is at 0, syringes or IV drips can't draw blood, or any reagents, from you. If it's above that, they will drain your Blood remaining stock.

On top of that, most blood-related chems have no effect on your undead circulatory system, or perhaps lack thereof. Filgrastim doesn't give you blood, heparin's overdose doesn't make you lose blood, and proconvertin doesn't reduce blood lost when draining a Chaplain or getting drained with a syringe or IV. Since you can't develop blood pressure or clotting problems, you also can't benefit from the latter two chems' other effects.

By using the Enthrall ability on a dead body, a vampire can revive the corpse as an loyal undead minion bound to their will and their will alone. They are variously called (vamp)thralls (based on the name of the ability and the name used in the end of round reports), ghouls (based on their exclusive GHOULSPEAK chat channel), and zombies (based on the zombie [name] that appears when these minions are moused over). Whatever you call them, they can commit as much grief as their master wants them to, in accordance to Rule 1, and are bound to the special mindslave rules.

Like their master, thralls/ghouls/zombies need blood. Unlike their master, their blood levels constantly deplete, and they have limited means of refilling it. They don't have abilities that let them gain blood by themselves, and drinking, injecting or otherwise ingesting blood reagent has no effect. Taking filgrastim doesn't add blood either. The only way for them to regain blood is for a vampire to use Enthrall on them to transfer the vamp's own blood to their minion.

Using an upgraded health analyzer on a ghoul will show them as having 500 units of blood, regardless of how much blood they really have.

For one, these thralls/ghouls/zombies/whatevers have an extra 100 max stamina. Among many other things, this lets them dish out more melee & special attacks, sprint more often, especially during combat, and, most importantly, absorb more stamina damage, thus making them harder to knock out. On top of that, they get a lot more health when their blood levels are high. At the max blood levels, they have 400 HP--the strength of four spacemen/women!

Unfortunately, conversely, they also have a lot less health when blood levels are low. When they're completely out of blood, they have a measly 20 HP. They also become slower as they lose blood, and unlike their health, it's always below average. Even at the highest blood levels, they're still slightly slower than normal.

Furthermore, it's usually pretty obvious if someone is one of these undead humans. Their skin is undeathly grey, and if you were to see them unclothed, you'd noticed how thin and gaunt they are from their neverending thirst for blood, droplets of which occasionally spill out of them onto the floor. Their eyes are a lifeless yellow-white, and their mouth is wide agape with a rather ominous red smear. When a scream erupts from these walking corpses, it comes out as a deep groan. If you somehow still thought you dealing with a regular spaceperson, putting your cursor over them or examining them shows them as "zombie (name)". It's no surprise silicons don't consider them Human, and the Secbots, GuardBuddies, and sec scanners consider them threats to the station.

Thralls/ghouls/zombies do not take extra damage from being in Space. While the Chapel does not harm them, standing in the Chapel does prevent them from using their only ability, Speak. This ability lets them communicate through GHOULSPEAK, a special channel accessible only by their vampire master and their fellow undead minions.

These undead beings are otherwise affected by the same things living humans are. They're controlled by actual players, are fully affected by chemicals and stun weapons, and can die and suffer brute, burn, tox, brain etc. damage. Perhaps most notably, cloning them results in a regular human, albeit one with the name "zombie (name)", which naturally leads to some very awkward confrontations.

What would a vampire be without really shitty and bizarre weaknesses? Read Twilight if you want the answer. Or better yet, don't.

Vampires are unholy beings and as such are weak to holy things. Merely being in the Chapel slowly burns them, gradually causing more and more damage until they die. The Chapel's aura also prevents the vampire from using their abilities on holy ground. If you're being harassed by one, you could try to seek refuge there. The vampire will likely stop chasing you unless it has attained full power, in which case finding a safe spot is probably the least of your worries.

Another holy thing is the good Chaplain. The chaplain is immune to most of the vampire's methods of disabling prey. They deflect Glare right back at the vamp, and Hypnotize, Diseased touch and Chiropteran screech have no effect, though Chiropteran screech Mk2 still disables their radios. As previously mentioned, vampires who try to suck the chaplain's blood take quite a lot of burn damage and lose blood, and while Enthrall still revives them, they won't become enslaved to the vampire. Beyond that, however, they can still be slowed down and knocked back with Call Frost Bats and can't see a vamp going invisible with Bat Form MkII.

Also, splashing holy water onto a vampire will cause it to act like acid, horribly burning them. It does nothing to non-vampires, so this is a good way of finding out bloodsuckers among the crew. One bottle of holy water is guaranteed to spawn in the Religious supplies locker in the Chapel Office, and on many maps, there's another bottle sitting on a desk in the same area. More can be mixed fairly easily or extracted from garlic.

In addition, the Holy Bible is a bane to vampires. Being beaten with the good book hurts for a fair 10 BURN, and while it's rather hard to force, vampires who try to pick up a bible have their hands burst into flames and will keel over in stunned agony for a very long time.

The last weakness of SS13 vampires is sunlight or, more accurately, starlight. Vampires cannot safely venture out into Space, even when properly equipped. Though they are undead, they still cannot breathe in space, and, more importantly, the light of the stars burns them incredibly quickly, much faster than standing in the chapel will. This essentially means vampires are confined to the station and anywhere a shuttle can take them. They could probably survive very quick leaps across space, but not on a regular basis.

In the unlikely scenario that security has managed to capture a vampire alive, using a blindfold and muzzle as restraints will remove their ability to use some of their nastiest powers. 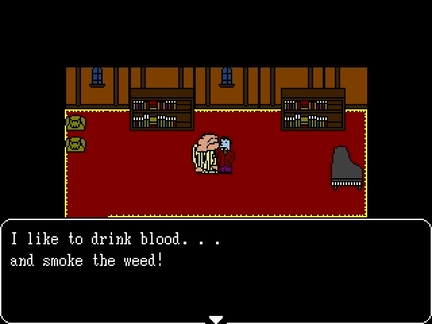