Difference between revisions of "User:ThatsMamaLuigiToYouMario/Pod Wars"

Welcome to the Front Lines

Good morning, NT Pilot Identification-1345. Time aboard the NSV Pytheas is currently 0654 Hours, and we are currently orbiting above Rota Fortuna. Forecast for surrounding space is sunny, with a 75% chance of radiation storms throughout the day. Please proceed to battlestations as soon as you are ready. Heavy syndicate resistance is likely within the area.

You play the role of either an NT or Syndicate pilot on this fateful event. The rest of space's history lies within you and your fellow pilot's hands. Will you seize control of the Rota Fortuna system, or will you be forced on a road of shame, fleeing with the tail between your legs? Only time will tell.

All Hands to Battle Stations: How to Play

Upon initiation of a Pod Wars round, you will either spawn as the Great Blue Nanotrasen Forces, or the Evil Bad Syndicate Operatives. You will be put into your base, spawning with all the starting gear of your faction, usually in a random place within your home base.

Pod Wars is a very open-ended gamemode with a few options and playstyles that appeal to a variety of different players. Many features from the basic game mode are still relevant and play out mostly the same within pod wars, with a few differences. It's up for you to decide what exactly what you want to do within this gamemode, but there's a few suggestions below if you feel lost.

For the first 15 minutes of the game, all control points will be locked, and enemy systems will be unable to be damaged. This is to provide a buffer time of getting resources as well as time to organize forces for a strategic offensive/defensive. Perhaps you'll want to spend this mining, or you'll want to go to a control point quickly to fortify it as much as you can.

Mining is a very important aspect of pod wars, allowing your team to not only build more powerful pods for combat but also allowing for upgrades to your gun's cell as well as providing for the needs of medical such as resources for auto-menders and hyposprays.

Medicine is always needed within pod wars. Like it or not, someone's going to eventually get shot and will need to be stabilized before heading out again. Of course, you have your standard doctor which will remain on the flagship and synthesize medicines and such, but you can also have your field medics which will be able to stabilize crew-members on the fly.

Of course, you can't have a battle without combatants. You'll of course have your pod pilots for space combat and controlling the exterior of control points, but you'll also need your ground infantry to help secure the interior corridors of control points and capture them. It wouldn't be a bad idea to carry some other stuff along with you too, such as a grenade or an extra power cell.

Don't be limited by the options above. Your pod wars experience is what you make of it. Want to be a Janitor? There's usually a few Tsunami-P3 bottles kicking around at your flagship or at some of the control points. Perhaps serving drinks to your friend and enemies may suit your fancy instead, with both flagships and Fortuna boasting bars. Perhaps you're a combat engineer, fortifying control points or simply just checking to see if the power on your ship is going decently enough. 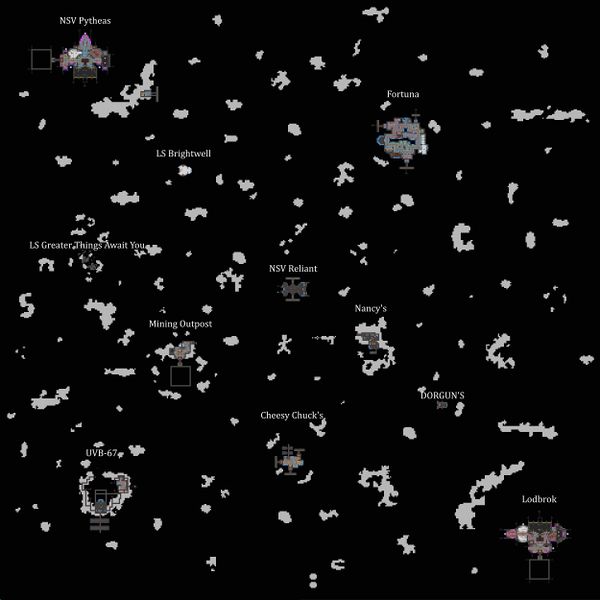 A small part of space surrounding Rota Fortuna and the main battleground of the Pod Wars. Yes, it is that big.

The NanoTrasen team's home base. It boasts a large hangar to the south, a hi-tech medbay with multiple high-speed automatic cloners, a mining section to the west, and even a small bar! The Pytheas is defended by an automated turret system which will shoot anyone without a valid NT ID.

In the center of the ship lies the NSV's manufacturing area, having 2 general manufacturers and 4 ship component fabricators. This will be the main area where you'll go to acquire materials for building pods as well as upgrades to your handheld weaponry. Do be warned however that this area can get quite crowded, and building a pod in this area can be a bit tricky because of it.

The hanger, located to the south of the ship, is the main staging area for pod construction and the main way to get in/out of the base. The game starts you with 8 combat dingy's and 4 mining dingy's, with more being able to be manufactured on the sides of the room using the pod fabricators. The room also has an ample amount of welding supplies and oxygen for pod repair and space travel, respectively.

On the way to mining from the portside hallway you'll spot medical. This facility boasts 2 deluxe cloning pods, a Grinder 5000 which will help eliminate corpses (and items), a few NanoMed's, and unique Medical Reagent Dispensers that are able to produce medical chemicals instantly without having to worry about the whole chemistry thing. There's also a few medical supplies and objects such as a few pairs of ProDoc's and medical belts, if you want to take up the role of doctor.

Starboard side is where the power station of the ship lies. Your ship's systems and fabricators won't function without power, so make sure to fill up those furnaces and set the SMES units to optimal power outage. If you run out of coal, dead bodies are an excellent fuel source as well as not clogging up the ship with corpses. There's also a small storage area for metal and other engineering related supplies if needed.

Just before the power station lies the bar and kitchen. These aren't used very often, but if you want to roleplay the role of a mess-hall cook, this is where you'll go.

Finally, at the north, you'll have the ship's bridge. There isn't too much up here besides Sylvester, the true commander of this operation, as well as an announcement computer. The NT Commander will also spawn here.

The base of operations for the Syndicate team. It has all of the same systems as the Pytheas, but the layout is significantly different.

The largest of the control points. Controlling this station grants access to an upgraded medbay capable of producing more powerful medicines than those on the home ships.

A claustrophobic arena, with little interior space and asteroid walls on 3 sides. Expect close-quarters combat here, as the tight walls and limited number of entry points mean that this outpost will be well-fortified against an assault.

Smack dab in the middle of the map is the NSV Reliant. The location means that whichever team holds this ship has an easy forward base to push from, but also ensures that this point is hotly contested at all times.

A cozy restaurant with a serviceable kitchen, a fryer, and cheese. A LOT of cheese.

Everything you need for a functional space shuttle. Which... really isn't much at all.

A deserted trading post. The backroom contains some boxes of goods- mostly junk, but you might find something useful.

A compact ship equipped with a couple rechargers.

To win pod wars, your team must drain the points of the other completely, or down enough of the enemy's core systems so that the flagship is non-functional. The latter is self-explanatory, with large bubble-like systems being easy to spot in combat. The former however is a bit more complicated, with multiple ways on how to score points within pod wars. Of course, killing members of the opposite team is one way to bring down points, with 1 point being subtracted for every death. Killing the commander nets you a bonus [who knows] points! Control points when held will also subtract points from the opposite team as well for as long as you control them. Additionally, bringing down an enemy's ship system will also net you a large subtraction of points!