I think I just activated a bomb?

Check the chat box. If it said something about 'overloading' or 'collapsing' or is currently billowing colorful smoke in your face, it's bad. If a station-wide announcement was just made about your current location, it's very bad. In either of these cases, you should probably shove it out the nearest ejector, which can be found in the below guide.
If it didn't do any of the above-mentioned things, it just makes noise. Leave it in genetics or something. 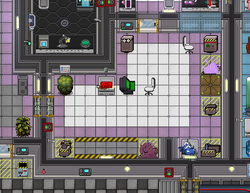 The most obvious artifact source. You start with two artifacts in the lab, and you might as well analyze them first.

Elsewhere on the Station

All maps have some other artifacts squirreled away, whether in space, maintenance, or the ocean. Ask other scientists or the AI for help finding them.

Vurdalak sells completely random artifacts, but they can be rather costly, so don't bug the quartermasters about them unless the budget is doing well; still, if it's reasonably far into the round, they're usually happy to buy out the stock. Gragg sells a singular handheld artifact for a relatively high price.

If you sell enough artifacts using the method shown in the next section, the quartermaster's office will start receiving shipments of random artifacts. You'll get a PDA alert when this happens; head down to the cargo bay to collect them, or radio the QMs to send the shipment to your lab via cargo transporter.

Miners can find artifacts in rocks, but they have a habit of just leaving them in space. Try radioing them or knocking on their door every now and again to check if they've found anything new.

The debris field is possibly the best and most reliable source of artifacts. A large number spawn scattered around the Z-level, though it can be perilous to reach them. Now if only there was a way to bring them directly to you...

Through a lucrative trading agreement with passing merchants, you can now send out artifacts to get money (and more artifacts!) In fact, these traders are so nice, they even pay you for shipping them a rapidly collapsing artifact bomb! How nice of them.
Here's how to get paid:

Recently (at the time of writing), some aliases were added which require far less typing than raw gptio. They're located in the same folder, /mnt/artlab. Thank zjdtmkhzt for these.
You don't need the square brackets, they're just to denote a variable.

This list contains every non-device object and chemical you can use to activate artifacts. Colors are used to code for strength, in relation to the min/max stimuli which artifacts can require- green for low, yellow for medium, red for high.

Contrary to popular belief, not every artifact can be activated with items. Sometimes, the needed stimulus is outside the range that these objects can apply. However, chemicals are dependent on volume, and can be used to apply any needed stimulus.

Note: Other than George Melonium (with luck), there are no chemicals which directly apply a force stimulus. However, explosions created through chemical reactions will apply force.