From lights to doors to fabricators to computers, just about everything on the station needs electricity to run. The power grid is the entire system of infrastructure that generates, stores, and directs electrical power to the devices that need it to operate. Setting up and maintaining the power grid is the primary responsibility of engineers, alongside repairing station hull breaches. This page serves as an overview of all of the essential infrastructure of the power grid. More specific details on the operation of specific engine types may be found in their own respective pages.

Power wires are routed through maintenance tunnels and under floor tiles in order to connect the generators to SMES units, and the SMES units to APCs. Breaks in the wire grid may cause certain equipment to not receive power, causing partial blackouts. A few select objects (such as meteor shields) may also be wrenched onto a wire in order to draw power directly from the wire, bypassing the APC or internal battery cell.

Wiring the power generators straight into the grid without routing the power through the SMES units is known as "hotwiring." Depending on the power output of the generator, this can range from totally safe to incredibly lethal to the entire station. As a general rule, having less than one megawatt of "extra" power hotwired into the main grid is not a safety concern. Unsafe power levels may cause APCs to emit electric shocks whos damage dealt scales with power in the grid. Electrified doors and grilles will also become significantly more powerful, even outright gibbing people at an extreme point. Hotwiring allows for the solar panels and other low-output generators to be directly wired into the grid, improving efficiency by bypassing the SMES and allowing the APCs to directly access all of the power.

Short for Area Power Controller, APCs are small grey electrical panels that handle the power draw of one room. They are powered by a wired connection to an electrical terminal in the floor under the APC, and they power other devices wirelessly through "safe" wireless power transmission. APCs have an internal power cell, which allows them to provide stable power even in intermittent power conditions, and provides a few minutes of buffer time should power fail entirely.

Clicking on an APC will open up its user interface. The APC controls can be unlocked by swiping an ID with "Electrical Systems" access, and silicons can modify the APC controls remotely if the AI control setting is not disabled. The APC access panel can be opened with a screwdriver, allowing you to see its NetID, interact with the wires, and check on the status of its systems. 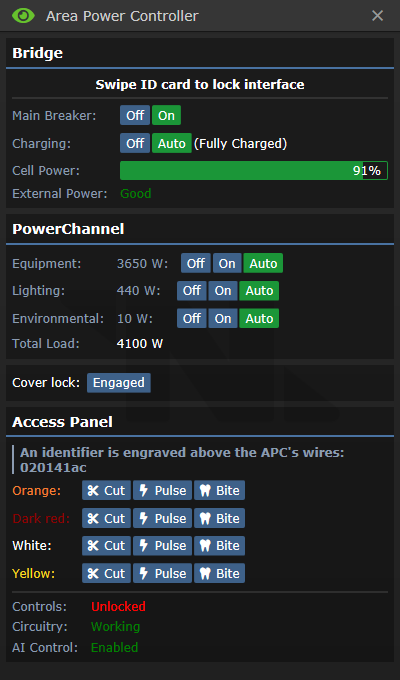 The SMES units are large capacitors that serve as a middle-point between the generators and the APCs on the power grid. They serve to turn the fluctuating raw power output from the generators into a consistent power power level for the rest of the power grid. They also can store energy, to serve as a buffer in the event that power generation fails. They are powered by an electrical terminal that is usually under the floor tiles adjacent to them, and output power to all wires that terminate under the SMES. 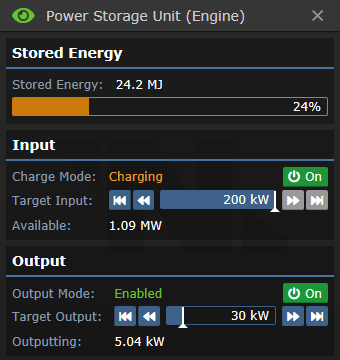 The heart of any stable power grid, power generators are devices that convert some available resource into electric power. Every map has at least one built-in power source that is meant to power the station, which is to be set up by engineers. Maps set in outer space also have solar panels, which can help supplement or partially replace the primary generator output.

Present on all maps set in outer space, solar panels produce power by collecting the radiant energy of the plasma giant, which for your purposes means for free. This makes them useful as a backup power source, if setting up the main generator may take longer than expected or if the main generator's output is unexpectedly low. However, their power output varies wildly depending on the angle between the station and the plasma giant, meaning that they cannot always be counted on to provide a certain amount of power.

The SMES units are rather inefficient at handling rapidly changing levels of low power output (as extra power is wasted, but having not enough power means the SMES doesn't charge at all). For this reason, it is common practice to hotwire the solars, meaning to directly wire them into the main power grid instead of routing the power through a SMES unit. The solars produce a relatively low amount of power, so it is not terribly dangerous for them to dump all of their power onto the grid. The APCs can then take as much power as they need, bypassing the SMES and resulting in greater efficiency.

Each solar panel array will be wired to a solar panel control terminal, which contains stats and controls for the solar array. 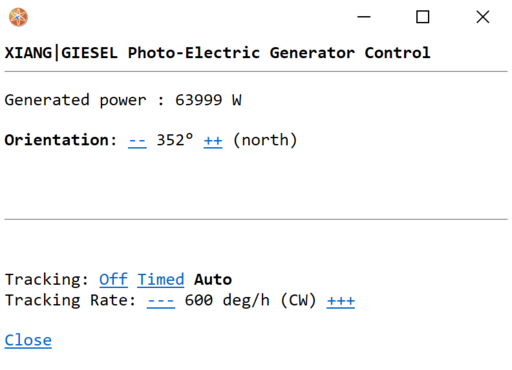 Present on Nadir Extraction Site, the catalytic generator creates power by harvesting ions present in the acid sea. It features cathode and anode rods which can be made of various materials that function at different efficiencies. It operates passively and has a relatively low power output, and so can be considered analogous to solar panels on outer space maps.

Present on Cogmap1, Cogmap2, Atlas, and Kondaru, the thermoelectric generator creates power from the temperature differential between very hot gas and very cold gas. It features two "loops" of gas piping: One with equipment designed to increase the gas temperature, and the other with equipment designed to decrease gas temperature. These two loops intersect inside the thermoelectric generator, where the heat flow from the hot loop to the cold loop creates electric power.

Present on Donut 2 and Donut 3, the singularity generator creates power by harvesting the ionizing radiation emitted by a gravitational singularity. It features containment pylons and power emitters designed to hold the singularity in place and prevent it from consuming everything, and radiation collector arrays that use plasma to convert radiation into electric power.

Present on Oshan Laboratory, the geothermal generator creates power by harvesting the thermal energy emitted by underground magma. It features stomper units that can lock a geothermal hotspot in place, and collector vents that can convert their heat into electric power.

Present on Clarion, and Nadir, the nuclear generator creates power by using the thermal energy cast off from nuclear reactions to heat a gas loop, which spins an electricity-generating turbine. It features a nuclear reactor that can be fitted with reaction rods made out of various materials for different effects and a gas turbine which can be fine-tuned manually by-hand or automatically with MechComp.

Aside from the main generators that are designed to power the station, there are also other power sources that may be more suited to different purposes. Most of these are best used as auxiliary generators, as their output is usually more on the order of powering one room than an entire station.

Usually found on small off-station sites which have very low power draw, power furnaces can be loaded with flammable solids and produce five kilowatts of power when active. They can also be ordered by quartermasters in the basic power kit crate, alongside a SMES unit.

Found in Portable Combustion Generator crates from Cargo, this machine burns chemicals to produce electricity. Output is based on the type of fuel used, the oxygen level in the air mix, the volume of fuel and air being put into the machine, and the ratio of fuel to oxygen. Like the warning in the machine implies, it emits CO2 when active, so watch the air you're breathing.

Orderable by quartermasters in the experimental local generator crate, these generators consume plasma from a small tank in order to charge the local APC or an inserted power cell. The amount of plasma consumed is directly proportional to the amount of power generated, and so leaving one on in a room with an APC that is not discharging its internal cell will not waste plasma. 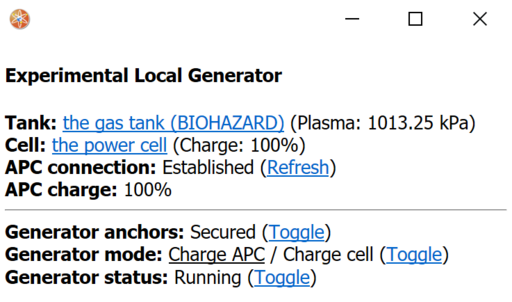 Present on Clarion and Destiny, these generators use radioactive fuel pellets to produce power for the station grid. Their power output is extremely low, more fuel cannot be fabricated, and they use their fuel cells very quickly. For these reasons, radioisotope thermoelectric generators are almost never used.

Occasionally discovered by artifact research, these artifacts can be connected to a wire to produce a random amount of power between five megawatts and five hundred megawatts. Clicking the artifact while it is over a wire will attach or detach it from the grid. Generator artifacts are extremely dangerous, and may cause shockwaves (breaking windows and stunning people) or electric arcs (causing burns or even outright disintegrating people) while active. If you wish to connect an artifact generator to the grid, it is advised that you get a clone scan before connecting it. In order for non-antagonists to prevent an artifact generator from being a danger to the station, a wire can be built from the generator grid into space, where the shockwaves and electric arcs are unlikely to hit anyone. Pay special care to not wire the generator into the APC grid, as this will cause APCs to emit electric arcs from overvoltage.

The power transmission laser can be used to convert excess power into cash. It operates like a SMES unit, with two major differences: It can store a much greater amount of power (one petajoule, or 10^15 joules), but it cannot output to the power grid. Instead, it fires a high-energy laser out into space, presumably at someone willing to pay to have a high-energy laser fired at them. The revenue generated by the PTL is governed by the following formula:

What the PTL does to mobs that touch the beam is also dependent on how powerful it is. Below one hundred megawatts it only sets mobs on fire. Between one hundred megawatts and five gigawatts, it does direct damage, and has a chance to slice off a limb. Above five gigawatts, it instantly gibs any mob that touches the beam. Above one terawatt, this death will be so violently explosive that it can actually breach the station hull. For aspiring crimers, do note that anyone who is gibbed by the PTL for the first time get the For Your Ohm Good medal, which is announced to the whole server and may foil your stealthy corpse disposal plans. 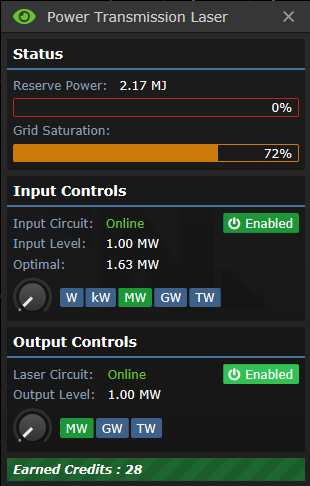 Most of the elements of the UI look and function identically to the SMES unit's UI. The elements unique to the PTL are: