When you click on a plant pot with an empty hand, you can check the plant to see how it is doing. Various indicators will appear when you do so, which describe the condition of the plant and soil - red indicators are bad, blue indicators are good:

In addition, you will receive a report of any chemical in the plant pot. Hopefully, there's at least water in it, but chemicals may also include stuff you've added like plant formula or compost. Some plants may produce nectar, a delightful treat for space bees. Harmful chemicals like toxic slurry may also appear, which usually require you to clean out the pot.

If you click and drag a plant pot onto yourself, you will completely clear out the pot. This not only empties any plant out of it, but completely cleans out all soil water, nutrients, everything. However, this will not work on pots infested with weeds! You must find a way to kill the weeds before emptying the pot if you want to get rid of them. Weeds will occasionally appear in unoccupied plant pots and may have various effects or even produce items, but remember - these are weeds and thus are useless and annoying at best, and downright dangerous at worst! Get rid of them when you can.

Plants carry genes which affect various things relating to their growth and crops. While plant seeds are easy enough to come by from the dispenser or ordering crates of them from the Cargo Bay, these seeds start out completely plain and devoid of any particular genetic fluctuations. Every time a seed is planted, it mutates a bit - any seeds harvested from this plant will carry those genes, which will mutate again when planted - this way, you can breed plants for particular qualities. Genes can degrade as well as improve, however - so be careful not to end up with completely useless seeds which produce no crops, or result in plants that die instantly.

To get even more in-depth with planting you have the plant analyzer, which can scan a plant, fruit or seed for genetic variables. For each variable, higher is better.

With these, you can tell how much of a certain plant you can harvest, or how long it will live, or what you need to do to keep it alive. Some plants aren't just one-off harvests, you can tend tomatoes for multiple harvests if you want! In fact, should you keep the plant happy (with blue indicators above - rich and fertile, and very healthy), you will likely have a chance at harvesting MORE than you would if you had just plain watered it. Some plants may even inherit a special genetic mutation giving them indefinite life, as long as you tend to it. It pays to keep an eye on your plants! It's just a matter of knowing when to add water, or fertilizer, etc. Plants work the same way in real life - to an extent. Don't water your plants? They'll die. Overwater? Same deal. Be careful with your plants, they are fragile, little angels~

Crop quality is affected by potency, endurance, and, to a limited and lesser extent, plant health. Just like life, higher quality plants taste better and thus heal more HP when you eat them, and their crops have more quality prefixes, like "good", "supreme", and "prime". Better also means bigger, for higher quality also means the crops have larger sprites. There's a limit as to how huge crops can get, but it's quite high; with some effort, you can get harvests that are almost as big as a person! You reap what you sow, and if you sow potency and endurance, you'll reap the rewards.

Apart from plain compost, botany starts with several plant formulas tailored to altering a plant's specific traits (all explained in the next section). If you want to experiment, call in the scientist or grab some Discount Dan's and test the effects of various chemicals in the soil.

The fancy stuff you use to enhance your plants or extract useful chemicals. The catering staff also have various culinary gadgets at their disposal for making with fancy foods and drinks with your favorite plants. Feel free to check Foods & Drinks for a full list of recipes.

In addition, there are a number of plant formulas at your disposal, in a variety of bottles.

Numerous other reagents also affect plant health or growth in some way:

Chemicals change plant traits when they're in a hydroponic tray or used in an infusion. Infusion immediately changes the plant's traits, so if you're hankering for triple-digit potency weed right then, right now, it's often better to stick with infusions. On the other hand, tray effects can add up. Due to the funny way BYOND uses numbers, a plant absorbs roughly half the reagents in its tray every while or so, but never actually runs out, like some sort of chemical Zeno's motion paradox. Since chems in trays don't actually scale up their effects (e.g. 0.25 units of saltpetre is the same as 250 units in the tray), then given enough time, adding a chemical into the tray can have a greater effect than infusing it into a seed.

Most of these seeds are readily available from the Seed Fabricator, but a few require a little hacking to access.

Whenever a plant's genes would normally mutate (when planted, exposure to mutagen, in the gene manipulator), there is a rare chance that the plant will become a mutant variant of its normal self. These have different effects depending on the species! Some mutations don't appear unless specific conditions are met, such when certain plant stats (usually either endurance or potency) are within certain thresholds or when a seed is infused with certain chemicals. Feel free to experiment or pester more experienced botanists.

The following is an extensive but quite possibly incomplete table of possible mutations:

The PlantMaster Mk3 is a powerful tool for the dedicated botanist. Instead of relying on Mother Nature and hoping for the best, you can tweak genetic traits with better precision. To this end, the machine is equipped with three distinct modules:

In case you don't already have seeds with the DNA of a particular plant, insert some fruits (one or two will do) and switch the computer to the extraction mode. It's that simple. 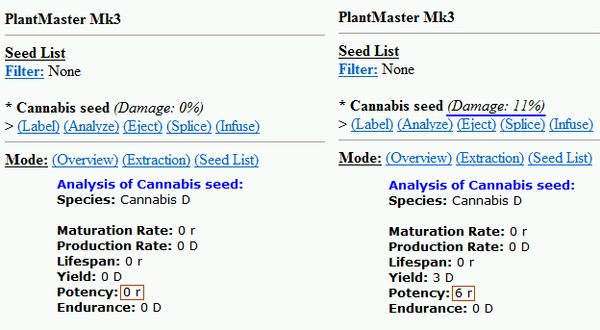 Infusion allows you to directly modify plant traits by adding chemical reagents to plant seeds. Depending on the reagent, it may hurt the plant, help it, or do absolutely nothing, and certain chems combined with certain seeds may wildly mutate the plant into an entirely different form. Just note that, despite popular conceptions, infusion does not necessarily result in a plant that extracts into the infused reagent (i.e. infusing water does not result in a plant that extracts into water).

Anyways, infusing seeds is a straightforward affair. Provide the machine with a seed and filled receptacle, bring up the seed list and proceed from there. Though the various plant formulas will usually be the choice for reliable results, you can use any reagent for experimentation. If the beaker contains several chemicals, you will be prompted to select one. Just keep in mind that every infusion requires 10 units.

Depending on various factors, an infusn may have undesired consequences. Here, the goal was to increase the potency of a cannabis seed with the help of saltpetre and while the operation was successful, it also had an effect on the yield trait. The outcome was beneficial in this example, but other potent reagents (unstable mutagen in particular) tend to have more negative side-effects.

Regardless of what you end up injecting, damage to the seed is almost guaranteed. It increases the chance of failed splicings, plants grown from them are less healthy overall and require special care. Compost is good, presence of mutadone in the nutrient solution is better.

Splicing allows you to combine two individual plant genomes together into a entirely new hybrid plant, with the interesting side effect of the resulting hybrid extracting into whatever the parent plants extracted into. This results in things like superherbs that heal burns, fix genetic defects, and remove toxin damage simultaneously, "prank" bananas that explode when eaten, and peanuts so sugary that they put people in diabetic comas. The mechanics of splicing are described below.

Each plant species has a variable called "Genome" which is used to track how similar two species are to one another. Generally two species from the same group (eg fruit, veg, herbs) will have genomes which are close to each other, and thus easier to splice.

When splicing, the formula for your chances is worked out like so:

So, an example. You're trying to splice Weed (genome 2) with Synthmeat (genome 7).

You start with 100% splicing chance.

Assuming you haven't damaged either seed with infusion, you have a 50/50 chance for this splice to succeed. That's not so good odds, of course. So how can we improve them?

What you need to do is chain. The genomes are generally done by group: Herbs have very low genomes, grasses and veg are in the middle, and fruit has very high genomes. Alien plants and weeds have genomes that are all over the place. This isn't a general rule either, there are exceptions here and there! Commol has a genome that's more in the vegetable group than the herb group with it being a root rather than a leaf, for example.

Out of this World

Out in the Debris Field, Adventure Zone, and Trench, you can find several strange, truly alien seeds (though, despite the similar appearance and name, they are not man-eater seeds) Experiment!