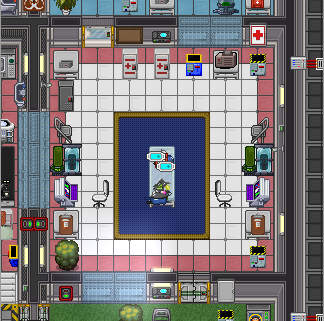 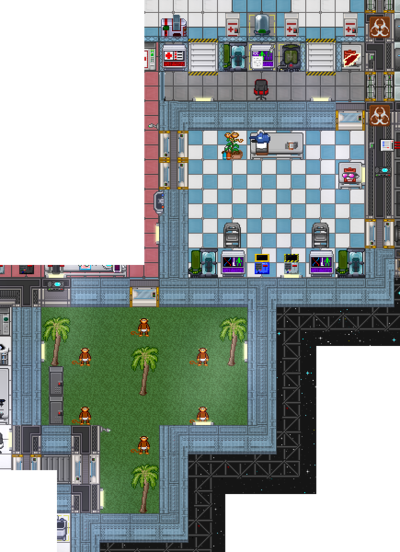 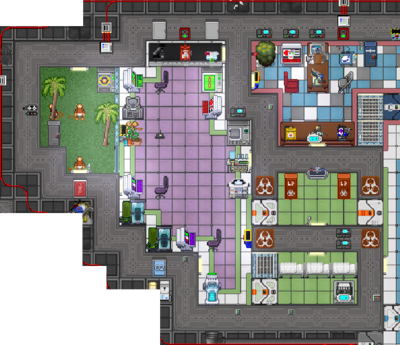 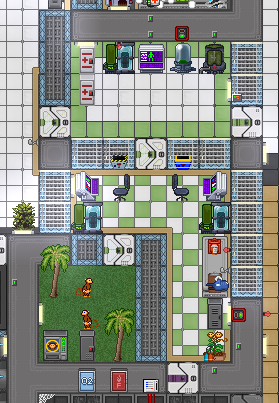 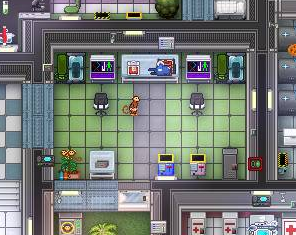 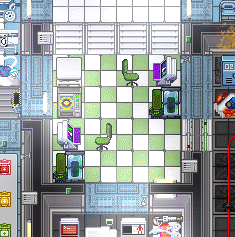 The Geneticist makes his home in the east end of the medbay. As a geneticist, your primary job is to research genetic defects and mutations and hand out fancy superpowers to people, like a biological counterpart to the Roboticist's mechanical augmentations. When all the medical doctors are dead or incompetent and the roboticists are too busy putting butts on everyone's heads, you may also want to operate the nearby cloning device to revive fallen crew mates through the use of wacky clone science.

Genetics has a couple of GeneTek Consoles, which the geneticists use to attempt to unlock the genetic code for super-powers. The process is absurdly elaborate, technical, and time-consuming, and there is too much to talk about for just one article section. To get a better understanding on how it all works, see the Guide to Genetics, especially the Potential section.

If at any point they make a mistake and regret giving themselves or someone else a mutation, or if someone walks into Medbay asking for someone to remove their Swedish accent, there's also bottles of mutadone pills to reverse it.

The monkey pen nearby is also home to a number of monkeys and a locker with electropacks, remotes for said electropacks, and blindfolds. Using wacky corporate superscience, you could uplift them into humanhood and use them for HILARIOUS ANTICS. Or just find more mutations.

Click on the console, click on the Research Menu link, and click on View DNA Samples. Find your name, click on some of the greyed-out squares on the DNA strands, and find out what of some of them do by clicking Research required. Once the research finishes, see if there's anything you'd like to activate. If there is, create an activator for each mutation, click on yourself with the activator in-hand to use it on you, and then click on console with it in-hand to redeem it for materials and other rewards.

Then, look up someone else's DNA for genes and do the same. It's no fun if only one person gets all the cool powers, and the gene-nerds who only activate their own mutations are the nerds other gene-nerds bully for lunch money. Your fellow Geneticist is perfect, since they're usually close by and perfectly willing to step inside your lab and get their genes activated. If you're sole Geneticist on-board, just pick anybody you'd like (we suggest the Clown or the Captain or your unfortunately overworked boss)

Unfortunately, you can't alter the code of a DNA sample while the person you're viewing isn't in the scanner or remotely activate their mutations, so you'll probably have to call them to your lab. You could say something like, "Hey, Pubby McJones, could you over to Genetics to get your Human SMES gene activated?", or some other variation thereof that will clearly communicate to your potential test subject what exactly you're going to do to them.

Now, nobody has to actually step inside the scanner to get their genes activated, (except for clones, who will have different genes from their "original copy") but it never hurts to. While the scanner can run out of air if someone stays in it for too long and cause them to suffocate, having internals will easily circumvent this. If your test subjects get claustrophobic in there and start worrying you've locked them in, kindly remind them that they can exit just by pressing any directional key or that *fliping (Hotkey: R) has a small chance of breaking them free, even if the scanner's locked. You can also eject them out yourself by either 1) right-clicking on the scanner and choosing Eject Occupant or 2) click-dragging the scanner sprite onto a floor tile.

Alternatively, if you can't bring your test subject to Genetics, bring Genetics to them! That is, vend an activator or two, and mail or hand deliver it to them! Or just leave it outside Medbay lobby--that works too. Works wonders on the many, many paranoid space men and women who'll suspect you're trying to lure them into your lab so you can kill/eat/drain them.

In any case though, don't just inject people out of nowhere; it's considered rude, especially if you give them one of the more debilitating/annoying ones. Ask/notify them first!

All the while, steadily work your way through the research upgrades for your equipment. One of the first and really most useful upgrades you can unlock is Gene Booth. With this upgrade, you can, for a modest materials cost, sell genes through the public Gene Booth, meaning you can distribute mutations without having to invite people to your lab or actually physically interact with them--great if you're busy with other subjects or don't feel particularly sociable. Plus, other people can get genes with far less waiting and without worrying if the person giving them is going to kill them. The only downside is you just get money for the Research budget instead of materials and other goodies, but it's fair a tradeoff for convenience. It's still a win-win for everyone!

Once you research DNA Injectors and Mutation Storage, the real fun of genetics begins. At this point you can store desirable mutations from your test subjects, combine them with with other mutations, and then use injectors to pass these mutations, even those who don't it in their genetic potential.

Monkeys are nowhere as useful as they used to be, but if you're looking for a particular mutation and have somehow not found it in the crew's, haven't had any luck with making it by combining mutations, and/or haven't found a test subject willing to take near-lethal does of radiation for the sake of science, you could try finding it in a monkey. Before you monkey around in this seriously unnecessary monkey DNA business, keep a few things in mind:

As a loyal crew member, you can sometimes be assigned some strictly optional objectives to keep yourself busy while you wait for something to happen. As a geneticist, you can expect to see the following:


End the round with at least 5 people scanned
You need to get people into the DNA scanner in medbay. Most rounds, you won't get 5 people in the scanner period, let alone 5 people who won't be cloned, so if you really want to do this you might need to try accosting kindly asking people in medbay to let you scan them. Perhaps you can offer them superpowers for their time or remind them that the whole process takes roughly 10 seconds at most.

Though genetics doesn't have exclusive control over the cloner anymore, the enzymatic reclaimer can still be a fantastic way to kill people that walk into your lab (or any volunteers you've recruited) if you have an EMAG and are able to score a flash off the roboticist (or hack his manufacturer yourself). Emag the reclaimer first, then if someone barges in, flash them, take off their headset and shove them into the reclaimer for an almost instant kill - or alternatively, lock them into the DNA manipulator and slowly irradiate them to death. Eccentricity and wandering is also expected from a geneticist. Hunting for superpowers is extremely boring, so many geneticists wander off to do something else. Nobody will question why you're dragging a dead body if you're heading back to medbay. Most people won't even mind if you stash a dead body in the morgue or grind it up for biomass as they'll assume you've already run it through the cloner first.

The Speed Injector can also make for some very fun gimmicks. Want to make everyone a monkey? Sure! Want to give people un-Synchronized Self Biomass Manipulation or Empowered High-Pressure Intestines to make them gib themselves? Absolutely! The possibilities are only as limited as the number of mutations. And don't forget, just because you're a traitor doesn't mean you can't do your job to get yourself some significant advantages...

Traitor Geneticist isn't all about clandestinely fiddling with everyone's genes, though. Combine the robustness of regular monkeys with an vicious desire to kill all life and an improved throwing skill, put them in a barrel just for pun, and you have the barrel of monkeys. Highly disruptive and virtually untraceable (Protip: Use a cargo transporter so people won't see you haul around the barrel), especially if you take some extra steps.

But why stop at evil monkeys or genetic debilitation? With the mindslave cloning module (aka, the mind "remapper"), you can unleash your inner mad scientist and build the clone army you've always wanted. When attached to a cloning pod, it makes all the clones that come out of it bound to serve your every command--forever! (No implants here, so people can't cut it out to remove mindslave status.) Now, since the module is incredibly obvious, you really can't attach it to the one in Medbay, lest some remotely aware schmuck remove it. Instead, you're supposed to build your own cloning lab in someplace secret, like in some forgotten closet in maintenance or the Ghost Drone Factory. Building one is pretty involved, but the results are very worth it.