The 'bad guy' for a given round. They are exempt from the rules about griefing and murdering and come with a set of special objectives. Most are purely optional and really more of a suggestion, with exception of the ones for Nuclear Operative (which shows them where they must plant their bomb to win) and Revolutionary (which shows the Heads of Staff they must kill to win).

When you spawn in as an antag, you'll get a special pop-up that offers a basic overview of your powers and abilities. If you want to see it again, you can just use the Special role popup command.

Am I an Antagonist?

How do you know if you're an antagonist? Mechanics-wise, the game usually makes it pretty obvious. If the game makes you one, it'll send you a huge red message in the chat and a big ol' popup telling you that you're one of the antags listed below. There's usually also some sort letter icon in the top right corner of your character's sprite/model; this is different from the icons used by SecHUD vision, which puts them in the upper left.

If you're unsure though (e.g. your game crashed when you spawned and you couldn't see if there was an antag popup), you can always ask via adminhelp; the hotkey for that is F1. Don't be shy. It's actually a pretty common question, and it takes just a few seconds for an admin to check if you're an antag, so you're not inconveniencing them at all.

A common misconception, particularly among those coming from other SS13 codebases/branches, is that if you have objectives, you are an antagonist. That's incorrect; non-antagonists get objectives too, so it's not a reliable means of ascertaining if you're an antag.

Antagonists can also recruit lackeys in the form of mindslaves and Syndicate cyborgs, or subvert the AI and its regular Cyborgs. Vampires may also convert the dead into ghouls/zombies. Wraiths can transform ghosts into poltergeists. Changelings can turn their own body parts in eyespider, handspider, legworm, and buttcrab minions. Sometimes, hostile antag critters appear through random events. Emagged cyborgs are renegades bound to no one!

Player selection for antagonist is purely random. Basically, the game creates a certain number of antagonist slots based the amount of people who readied up, with different ratios and types of antags depending on the game mode, and then for each slot, randomly selects from the group of people who have that antag type enabled.

Antagonist selection happens before job selection. Thus, as a certain Tip of the Round will tell you, it is entirely possible to end up the round antagonist even if you have Security Officer or Head of Security on Favorite, in which case the game picks a job based on your preferences for other station jobs and available job slots.

Players can also be selected for antagonist when they join after the round has started, if the game mode supports such. Each latejoining player has a simple random chance of being selected for antagonist. If all the antagonists are dead, the more likely they are to selected. The process ignores preferences. Players who join as Head of Security, Security Officer, or Security Assistant cannot spawn as latejoin antagonists.

Partway through a round, random events usually trigger. One such event, the intruder alert event, either creates an AI Blob or asks eligible ghosts if they want to be respawned as a random antagonist, randomly decided from among several different antag choices, ranging from Vampire to Wraith to Wrestledoodle. There's a similar event that also picks from ghosts, but instead creates a malevolent spider, gunbot, or fire elemental. These events cannot occur if the game mode type doesn't allow for latejoin antags.

To be eligible either of these, a ghost must not have... 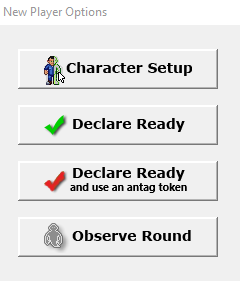 If a new round is starting, and you have at least one token, you'll get a special option to use them for the upcoming round.

Antag tokens are basically compensation vouchers for a chance to play as the round's antagonist. They're not in-game items in the way Discount Dan's tickets are vouchers; rather, they're purely out-of-game, and, more importantly, "bestowed" by an Admin. The "bestowed" part is in quotes, because there are four main reasons an admin might give you a token:

An admin might also give you one as a gift for doing something funny/entertaining/interesting, but this is extremely, extremely rare, and like with a lot of gifts, deliberately trying to earn one usually doesn't work. In this sense, they're more like compensation money you'd get for a defective product than an actual prize or gift.

Antag tokens are distributed at an admin's discretion. You should not expect to be guaranteed a token, and there is no requirement for an admin to provide a token.

The choice to redeem these will appear when you join the server during the pre-round lobby, as shown on the image to the right, and can be used any time before the round starts. Antag tokens ignore antag preferences, so you can't become a Wraith by configuring your preferences to only accept being a Wraith and then using a token. As the prompt says, if using that token would make you into an Antagonist that isn't supported by the round type, you'll get the token back.